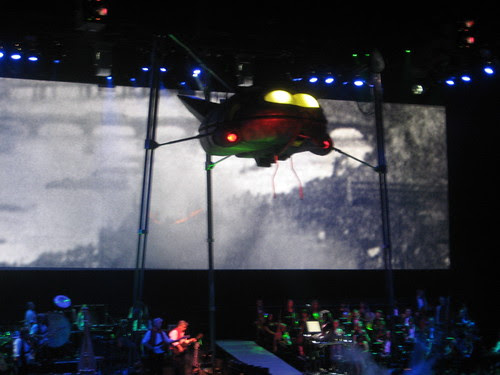 But still they – you know the score. I took myself down to the new O2 place (formerly the Point Depot) to see the live version of Jeff Wayne's Musical Version of the War of the Worlds by Jeff Wayne. It was great, but Frank's APA member "Thom" made a better job of describing it than I could. In broad terms, it consisted of people playing music on a stage (conducted by Jeff Wayne) while animation and stuff, usually pretty lame, was projected on a screen behind them. There was also a weird computer generated three dimensional projection of a young Richard Burton saying his lines, and occasionally people would run onstage to sing and act out their parts. And there was a giant Martian war machine, lowered down onto the stage to frighten us all with its implacable might.

I found the newly redeveloped venue a bit disorientating. The exterior is the same as it ever was, more or less, but the interior is totally different, so much so that it is like a different place entirely. Once inside, I felt a bit like a cat who had been pushed through a catflap, like I had ended up somewhere very different to where I was meant to. The place is like a huge amphitheatre now, nothing like the empty barn it had been previously. And it all seems to work a bit better now – it is much easier to do important things like get a drink.

The War of the Worlds show was great fun. Obviously, if you are some kind of retrograde thinker this might not be your thing, but if you have grown up thrilling to the sounds of Martian invasion then you would have loved it.
Posted by ian at 2:59 PM

I loved it so much I'm going again this year.....although not too sure about the new cast members.

No Phil Lynott, no credibility. I liked it a lot, but I think I would wait a while before going again.