Have you ever been to London? If so then maybe you have been to Trafalgar Square. It has a statue of Lord Nelson on top of a pillar, and it also has some other statues there. The other statues are on plinths, as is often the case with statues. The square has four plinths, so you would think that there would be four statues – but no. Only three of the plinths have permanent statues. The fourth plinth lies vacant, or is used for temporary exhibits.

At the moment, the fourth plinth is hosting Antony Gormley's One and Other. Gormley is perhaps best known for monumental wrought iron sculptures like The Angel of the North, but One and Other is different. Gormley has basically let random punters apply to appear for an hour on plinth and do… whatever they want.

One of my pals from the internet got a slot on the plinth and decided that what she was going to do was read out letters from people. I decided to send a letter to Lord Nelson, and she read it out, which was very exciting – I feel like I am a foot soldier in conceptual art history. 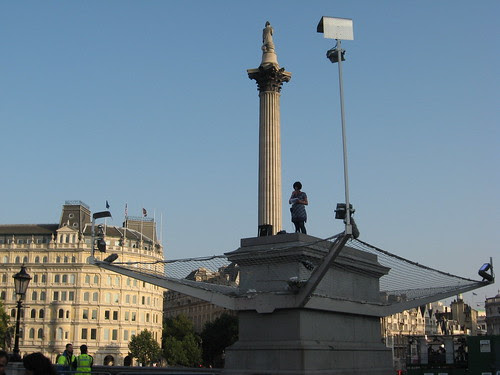 I happened, coincidentally, to be in London on the day Tricia was plinthing, and made it along to see her read many other letters (semi-accidentally missing my own being read). It was an interesting business. Some of the other letters were very impressive. One of the most striking being one that some guy wrote about his estranged parents (they have disowned him for repudiating their religion), a powerful and affecting piece of writing. In complete contrast, I also loved the letter written by some fellow to a local pub, complaining about the unsatisfying meal he received from them. She also read a letter from that blog that reprints famous letters from the past (can't find the URL for this, can anyone help?).

So yes, deadly fun. Over the time I was in the big smoke, I drifted over to the Fourth Plinth a couple of times, and it was very striking how far above the average Tricia was in her endeavours. The other plinthers seemed generally not to really have any idea what they were doing up there, just passing the time waving at their friends or taking photographs. This does of course beg the question of what I would do if I was up there. Mmmm. I suppose one obvious thing would be to adopt a succession of human statue poses. 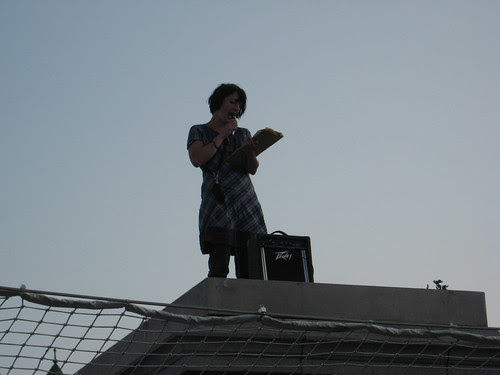 Anyway, should you want to watch Tricia reading her letters, you can do so here, and you can watch random other people plinthing here. You can also look at more of my Trafalgar Square pictures here. If for some reason you want to read my own letter to Lord Nelson, scroll on.

Email ThisBlogThis!Share to TwitterShare to FacebookShare to Pinterest
Labels: Art, The Sea, Travel