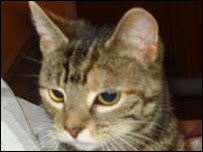 In December last year, the BBC reported that Sarah Goddard of Derby had to put a new post box in her garden to stop Georgi, her cat, from attacking postmen delivering mail. The cat had previously left postmen bleeding after scratching their fingers when they were putting letters through the letterbox in the house's front door. While apologising for the injuries, Ms Goddard denied that Georgi is a vicious animal, explaining "I think she only wants the letters but obviously she must just accidentally catch [the postman's] fingers."

And here are some further stories about two other cats and a pheasant:

jeezus, what do these postmen expect if they keep sticking their fingers in other peoples boxes!