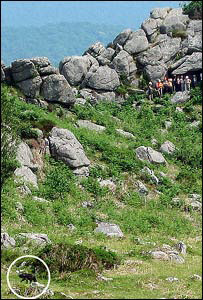 This is an old story, but a good one, and I must tip my hat on this to the good folks at ILX. Anyways, you are familiar, no doubt, with the alien big cat phenomenon in England - mysterious sightings of big cats in a country where such animals do not officially live in the wild.

One famous example of such an alien big cat is the Beast of Bodmin, a large cat-like monster sometimes seen on the Bodmin Moor. Nearby Dartmoor had its own big cat sighting last summer, when falconer Martin Whitley photographed a large, bestial creature in the vicinity of some school children at Hound Tor. "The creature I saw was black and grey and comparable in size to a miniature pony," he reports. 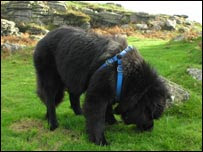 Lucinda Reid from Heathfield is however adamant that the photographed "beast" is non other than her pet dog Troy, a Newfoundland, a 12 stone "gentle giant".

The most famous Newfoundland in that part of the country is of course Bilbo, the life-dog on Sennen beach. When asked for a comment on his breedmate's beast-like activities, Bilbo replied "Always swim between the flags".

More: Beast of Dartmoor 'is my pet dog' (pictures from there too)
Posted by ian at 10:32 PM

Eeeeeeeeee! I saw the most amazing pair of Newfoundlands in York in December. I had never seen Newfoundlands with such thick, lustrous, teddy bear fur. One was black and one was brown (never seen a brown one either)! I gravitated toward them like I do when I see a dog I want to snorgle (possibly squealing). In Chicago, it's no problem cos we're the largest dog-friendly city in the country. But the parents of these Newfoundlands would not let me bury my face in them. :-(