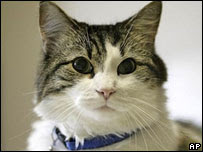 Oscar the Cat lives in a nursing home in Providence, Rhode Island. According to a study reported by the BBC, Oscar has a most unusual ability. The cat can apparently sense when patients are about to die, invariably curling up beside those whose death is near. The nursing home's staff now alert the family of anyone beside whom Oscar curls up - they are marked for death.

Interestingly, if removed from the side of a soon-to-die patient, Oscar paces up and down, mewing in protest.

Is is just coincidence that Providence is the town where H.P. Lovecraft made his home? Could it be that Oscar is not a cat, but an incarnation of YOGSOTHOTH, and that he is drawn to the dying so he can eat their souls? In ur nursin home

No, no, you've got it backward. It's the whippoorwills that steal the souls of the dying. Oscar is obviously keeping them at bay. Most likely he's one of the Cats of Ulthar, who must not be killed or harmed - or else.