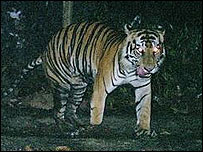 There are apparently only 400 Sumatran Tigers left in the world. They suffer from habitat loss and the depredations of poachers. They are however not going quietly. One tiger was recently caught in a trap, but managed to escape by gnawing his own paw off. He has been seen several times since, and is apparently in good condition.

Some of the other tigers are acting in a manner that is fierce but not entirely thought through. The parks in which the tigers live 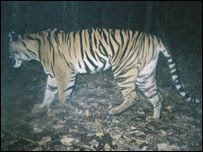 are full of motion triggered cameras, used to capture images of poachers. One tiger has become so annoyed by the flash on these cameras that he destroys them whenever they take his picture.
Posted by ian at 9:51 PM

Girls do that too, destroy yer camera when you take photies of them