In a Facebook discussion on this important topic, Mr Scott Watkins suggested that he would far rather read about my visit to the Glastonbury Festival 23 years ago than whatever current stuff I might otherwise write about. Because I believe in giving the public what they want I will go ahead and do this.

I have previously written about this festival, but unless you are one of the few people in the world with a complete leather-bound collection of Frank's APA mailings you will not be able to read what I had to say on the subject. This I am writing from memory, so Frank's APA collectors will be able to see how my version of history has changed over the years. Because I cannot really remember too much about what I actually saw at the festival I am going to deliver an impressionistic ramble through my memories of this event rather than a ponderous list of all the things I saw in order (if you like ponderous lists of things seen in order, check out my review of Counterflows).

Van Morrison - I was not the rich man then that I am now, so when my friend Mark said he was going to Glastonbury I was not at all sure that I would be able to afford to go. I was listening to Van Morrison's Astral Weeks when I did the sums and realised that I somehow had enough cash to make the journey, with the result that Van Morrison for me will forever be associated with the festival. He played at it but I did not go to see him.

Couples of yore - I went in a group of three couples: Mark & Lisa, Sara & Pete, Katharine & myself. To the best of my knowledge, none of these couples still exist. 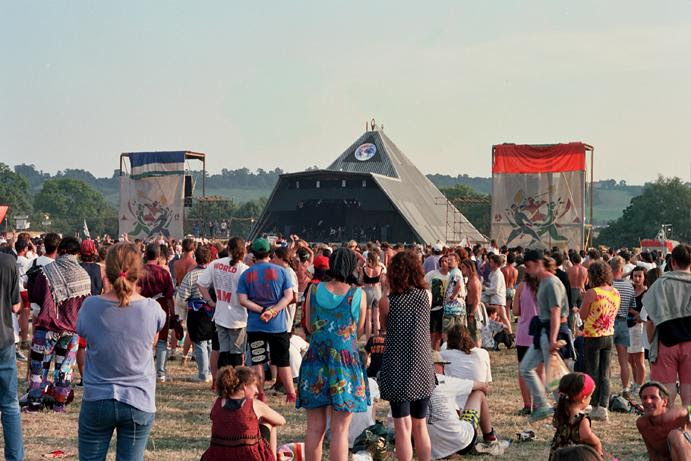 Trousers - Our departure from London was delayed because Pete had no trousers to wear to the festival and had to go and buy some. I was waiting for the others on my own in a train station and they had to ring the station and have my name called out over the tannoy to report to the information desk for this important message. This is how we did things in the pre-mobile phone era.

Friday - We arrived on the Friday. Rookie's mistake. Always make sure to arrive before the Friday.

Cheroot - A friendly man chatted to us as we arrived with our rucksacks looking bedraggled and unsure as to where we were going to camp. He gave me a cheroot and I thought "OMG this festival is amazing, random strangers just hand you drøgs" before realising that a cheroot is just a type of cigarette.

Midway Still - They were fairly big at the time. We did not see them but as we made our way through the festival site looking for somewhere to camp we heard them playing their cover of 'You Made Me Realise' off in the distance.

Shady Customers - In the campsites shifty looking blokes would walk around saying "Es? Acid? Speed?". I think they may have been vendors of these contraband products.

Crusties - Crusties were big back then. When we saw some we were very excited. I was totally amazed once I spotted an actual dog on a string.

Sun - It was bloody hot that year. No subsequent Glastonbury for me has ever been such an unadulterated scorcher. Even so I think of scorchers as the normal Glastonbury state and the other ones as aberrations.

Carter the Unstoppable Sex Machine - Although they were subsequently airbrushed out of musical history they were a big band at the time. They headlined the Friday night on the Pyramid Stage. We went to see them. They were amazing! I think this may have been the first time I ever saw a band putting on a big stadium show with screens and stuff like that. Despite being just two guys on stage I remember them as astonishingly good showmen. See dog rough footage filmed from crowd of this performance here.

Controversy - But not everyone was on the same page. There were some disputed incidents after the previous Glastonbury and this was the first one where New Age Travellers were not admitted to the festival for free. Some of them took umbrage at having to buy tickets or climb over the fence like everyone else. Jim-Bob from Carter took umbrage on their behalf on the Pyramid Stage, saying that it was a facking disgrace that they were not getting in for free. It is nice to know that from my first Glastonbury people were complaining that it had lost what used to be great about it.

Stone Circle - Dude, they had their own stone circle!

"My menstrual egg timer" - It was an artwork. 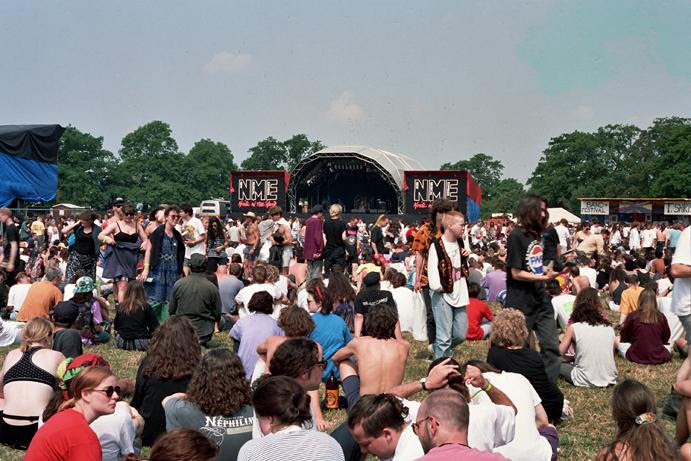 The NME Stage - Back then the Other Stage was called the NME Stage. And it was in a different place to where it is now.

John Peel - He MCed one or other or both of the Pyramid and NME Stages. At one point he read out a message for some named person who was attending the festival. "Your mother says that if you do not sit the exam on Monday you will fail your Finals".

Curve - It has been said that I saw them. I have no recollection of this, your honour. They do not strike me as being a very outdoor festival band.

Lush - I do remember seeing them. This was around the time of their first album. I remember them being enjoyable but not life-changing. Again, they may not have been a very outdoor festival band. 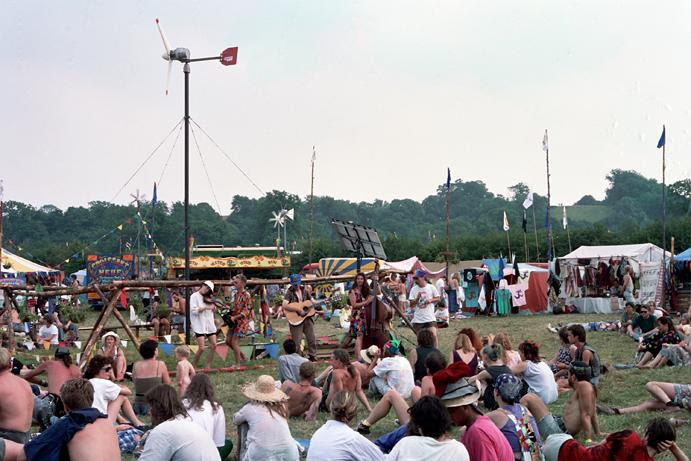 Blur - I saw them too, playing in the afternoon. They were not the all conquering colossus they would subsequently become and were instead a mid-table faux indie band popular with girls. I do not recall whether my antipathy to Blur had kicked in by this point but I certainly remember them being unremarkable. Memory is a funny old game, as my fellow attendees remember them as being brilliant. Mark reports that Damon Albarn climbed up on some speaker stacks and then fell off and chipped some bones or something; I have no recollection of this incident but its sounds like the kind of twuntish thing he would have done. Someone recorded this important event for posterity; you can watch it here.

P.J. Harvey - I saw her too, playing with the early power trio (herself, Rob Ellis and Steve Vaughan). I think I liked them but I was not that familiar with her work at the time and not much of the detail stuck with me.

Memories, eh? - You may be wondering what exactly I do remember of the performances I saw at the festival.

Television cameras - There were few to none of them. This was in the halcyon days before Glastonbury allowed in the cameras and started selling itself to the people at home. That said, there was a documentary made about that year's festival which produced some footage, and there seems to be several recordings of complete performances on YouTube.

The Shamen - We somehow found ourselves in a field full of speeded up Antos when the Shamen came on. Mr C had just joined them and it seemed like every song was about how they were the Shamen and they keep coming on. It put me off the band for a long time and it was only the success of 'Ebeneezer Goode' that got me interested in them again.

Shit Caberet - There was plenty of good cabaret but I remember being fascinated by this amazingly awful cabaret act. Sadly I just remember that they were awful, not who they were or what was awful about them. But I was so fascinated by their awfulness that my friends thought I actually liked them. Good God no!

Toilets - I was afraid of the toilets.

Ian Moore - Wizard - In the New Age Mystic Healing Field there was a sign for someone called "Ian Moore" who was a wizard. You can see what might be his website here.

Loreena McKennitt - I think we were sitting somewhere when Loreena McKennitt came on and sang a song that was a setting to music of the Yeats poem 'Stolen Child'. It was a stunning moment of great musical beauty. Then my friends were going off somewhere else and I went with them. To this day I have never heard anything else by Ms McKennitt, fearing that it could never live up to my memory of this moment.

Heat - Seriously, it was bloody hot. I think on the Monday as we were making the long walk to where the buses pick up for the train station I really felt what it must have been like for those blokes in the war. Unlike them I was able to buy an over-priced ice pop from an enterprising local, which was nice.

And that was that. Even if my memory is not up to much about the event as a whole it was totally great. I don't know how it took me so long to go back there again. 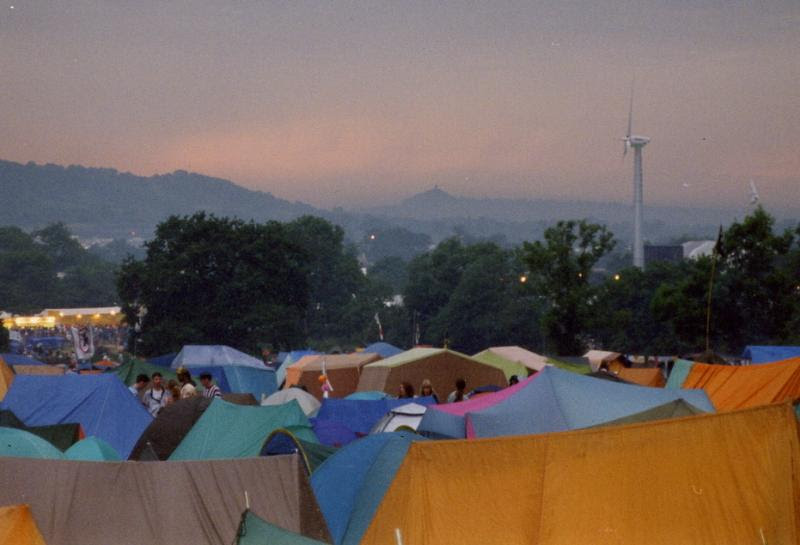 1992 was the first Glastonbury I attended. The last time I was there was in 2005. If you want to read about that at great length, click here. 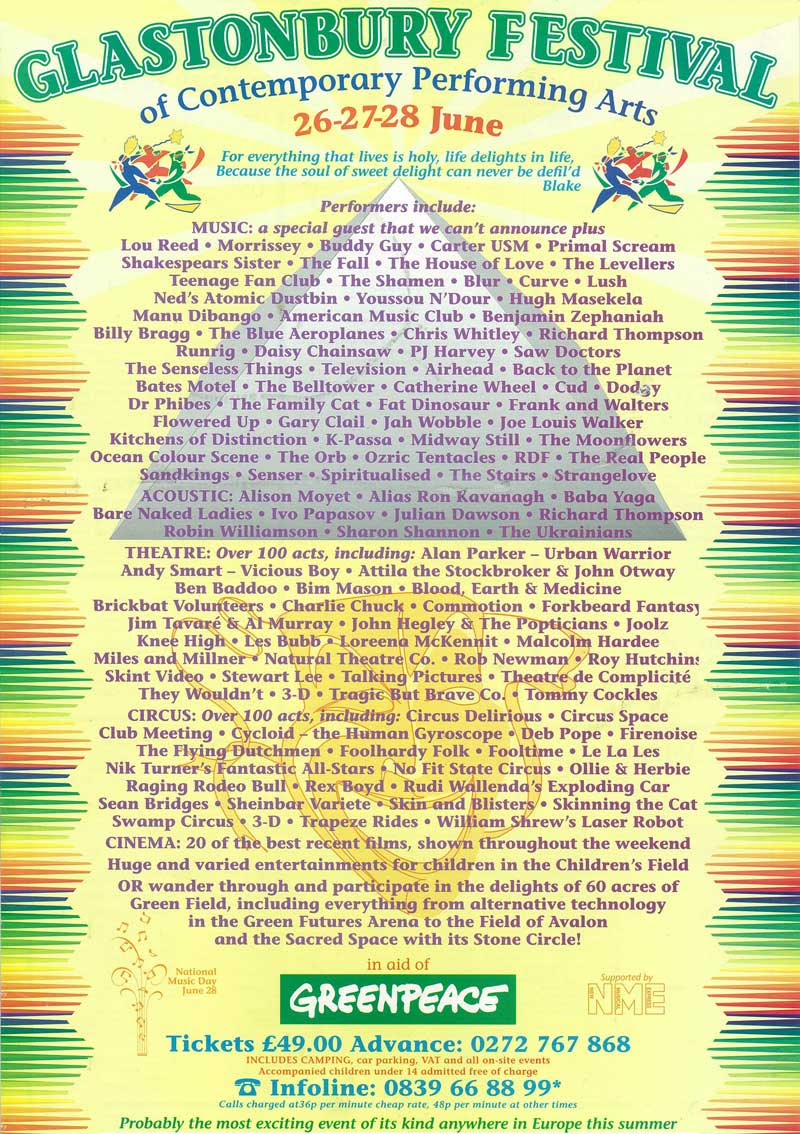