I am belatedly posting about my time at the Counterflows festival in Glasgow. You can see all my posts on this here and the previous day's here.

I woke up to the sound of motorbikes. A convoy of motorbikes were heading off somewhere past the flat I was staying in. Many of the bikers were wearing strange costumes. I think it might have been a charity thing. Then a parade of Sikhs went by, headed by a load of blokes carrying swords, followed by some carriages and a great mass of their co-religionists: more indeed than I have ever seen in one place. I was curious as to what would come next along the road. A parade of Orangemen perhaps, or a gathering of the Ancient Order of Scottish Highlander Cliches, but instead the road went back to its normal Sunday usage. Nessa's friend Stewart made us a mushroom breakfast, which was tasty. After that we began a long journey down to the wilds of south Glasgow where Counterflows events were taking place. We visited a park and climbed a big hill and looked off in the distance at mountains. I was also excited to see the remnants of the Red Road flats. The park was fun but eventually we forced ourselves to leave it to head down for some music action in the Glad Café. 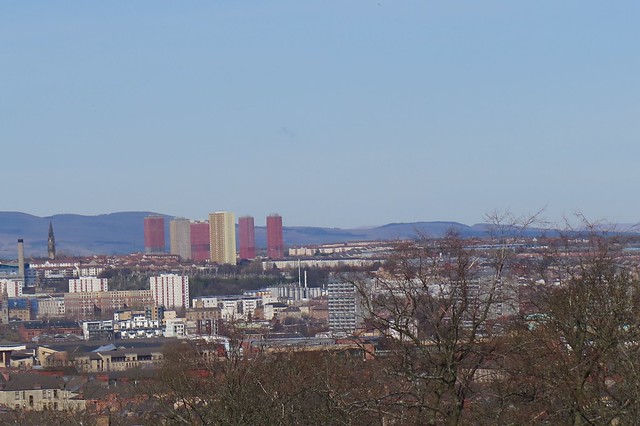 The first thing I saw here was a performance by Andrea Neumann who was doing something with an Innenklavier: some kind of inside-out piano thing. Once I forced myself to perk up and engage I realised that this performance was one of the best things ever. As it progressed the set became more programmed and involved less physical interaction with the Innenklavier. Programmed music can be dull in the live context but Ms Neumann made things visually interesting by making it look like she was triggering the music by gestures and moves of her body. So you would get her reaching up to grab something out of the air to time with a burst of electronic noise. It was fun. Everyone liked it.

Richard Youngs was on next, playing a solo acoustic set. Apparently he is as well known as a maker of neo-folk music as for avant-garde conceptual stuff, so it was interesting to experience this string to his bow. He had young master Sorley playing with him for some songs and also he revealed that one song (called 'Fireworks' or something) was all about how great it was to have a son. If I had a son who can reliably take part in conceptual art music productions I would probably think that too.

A sudden hunger meant I missed Raymond Boni's set while I ate a tasty Glad Café meal. Then I had a small piece of cake and the nicest macchiato I have ever had outside Ethiopia. I did manage to catch the last performers: a jazz trio comprising Daniel Carter, Fritz Welch and George Lyle. Unfortunately I was stuck over to one side of the venue at the back and so had a restricted line of sight, which led to a certain alienation from proceedings. And anyway, jazz trios are best appreciated in a seated position. 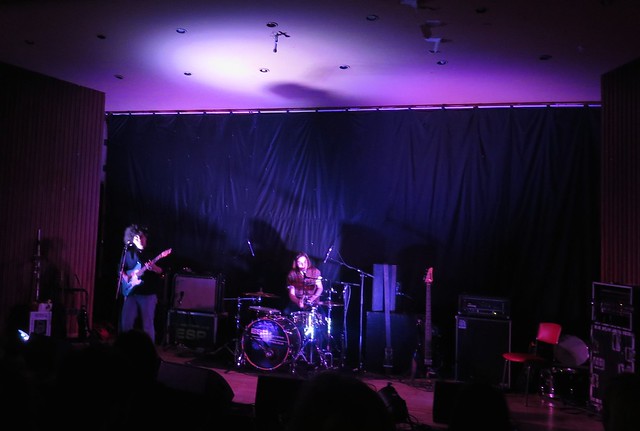 That was it for the Glad Café, but there was still more to come from Counterflows. We crossed the road to enter the Langside Halls were two more acts were ready to entertain us. First up were Sacred Paws, who are two women (drummer and guitarist, both doing some vocals). They were only thing on the bill of the entire festival that could be loosely classed as "Glasgow Indie", though they were more unique than that makes them sound (as are all of the Glasgow Indie bands anyone has ever actually heard of). The guitar playing was very jangley, suggesting more Congolese players than Johnny Marr, while the overall thrust of the music was angular. I enjoyed this a lot and think their music would repay further investigation. 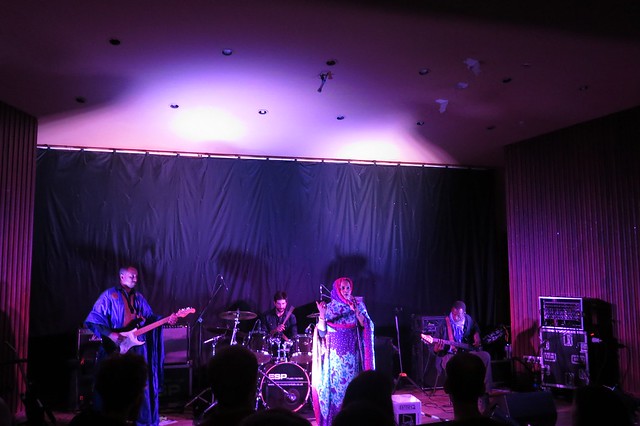 The last act was Noura Mint Seymali and her band. She is a singer from Mauritania and her musicians were playing desert guitars music broadly reminiscent of the likes of Tinariwen, Group Doueh, Mariem Hassan's band and the like. The combination of striking female vocals and that kind of accompaniment is something I always love listening to, particularly in the live context. This lot seemed to be particularly good exponents of the form, managing to work the crowd up into a dancing frenzy. During Sacred Paws I was thinking that their music was the kind of thing that would be great to dance to but I was too tired to do any grooving. Then during Noura Mint Seymali's set I found myself dancing like a madman to the irresistible rhythms.

Pretty quickly the crowd found themselves joining hands and dancing in a great circle, charging around with frenetic abandon. One funny thing was watching people divesting themselves of drinks, bags, outer clothing and other stuff so that they could dance more freely. It was all complete brilliance, one of the best musical experiences of my life and a great end to the festival.
Posted by ian at 1:05 PM