I am belatedly posting about my time at the Counterflows festival in Glasgow. You can see all my posts on this here and the previous day's here.

On Saturday morning my host Nessa made porridge for both me and the other loafer staying with her. Thanks Nessa! Then we went to The 78, which is a café-bar, to see The Flexibles. They were a four-piece. Featured Festival Artist Richard Youngs provided some kind of mysterious electronic percussion. There was another adult playing bass and a young lad on cello, but the real star was Sorley Youngs, Richard Youngs' young son, who played guitar haphazardly and provided vocals. Having a small person on vocals (with lyrics sounding like he might have had some input into them) gave this a certain outsider quality, but only to an extent. Sorley Youngs had a focus to his performance that I think would be lacking in most people of his age. I think he must have performed live a bit because he managed to avoid the twin horrors of being either cute or coming across as some horribly precocious little monster. Instead he just got down to business and delivered us songs with these lyrics: 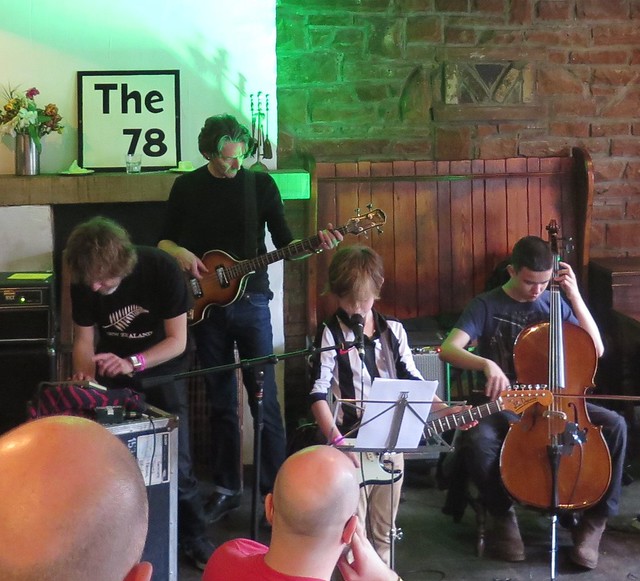 Back in the CCA we watched a film called Ears Switched On And Off, directed by Chen Singing, which was about Taiwanese sound artists. It particularly focusses on Dino, Wang Fujui and Lin Chiwei. The presentation of the work by these people was interesting, as I think were the artists themselves, but I felt the film could have done with more contextualisation of the arts scene in Taiwan. Alasdair Campbell, the festival director, introduced it and said that there had been an artistic blossoming in Taiwan in the 1980s, following the lifting of martial law, with the state happily throwing money at avant-garde art; then apparently the state had second thoughts once it saw what the avant-garde artists were getting up to. There was no sense of this in the film.

One thing that was interesting was a throwaway comment in the film about how these sound artists find themselves putting on more shows in Beijing than Taiwan. Apparently there is a big arts scene in Beijing. That ran against my association of authoritarian politics with deadened cultural activity. Nevertheless the artists did have problems in Beijing. The film showed Lin Chiwei rehearsing his Tape Music piece (of which more later) with a Beijing choir. At one point we see the choir leader approaching the artists to say that she and the other choir members are concerned that his work might be some kind of covert Falun Gong plot.

I may have enjoyed the film more if I was less tired. I think by the end I was mainly appreciating it as a combination of appealing images and attractive sounds. 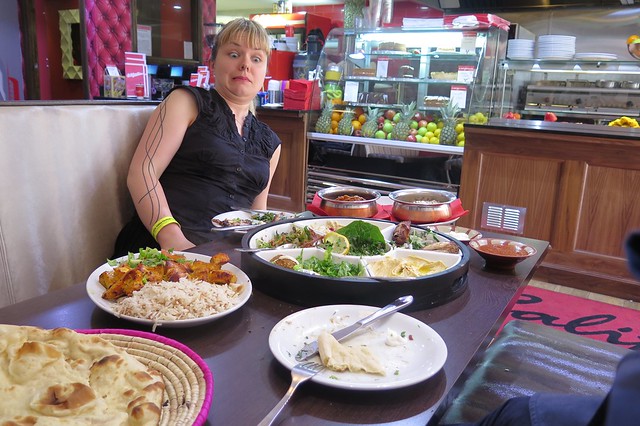 Nessa and I then went for lunch to the world's tastiest Lebanese restaurant that is not in Lebanon. It is called California and looks like an American diner. We ate all the food. If you are looking for this place yourself, it is on Sauciehall Street, a little bit east of the CCA. 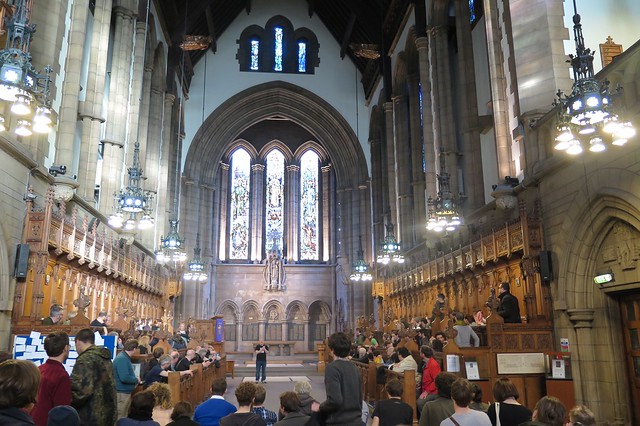 Out in the leafy streets of Kelvinland the Glasgow University Chapel was playing host to a performance by jazz saxophonist Evan Parker and organist Stan Stendell. They were improvising together. As is the way of church organs, Mr Stendell was hidden from view, so it seemed like Mr Parker was playing against a mysterious and all pervasive self generating noise. From my seat I could hear the organ's stops being pulled out and various bits of the huge instruments internal works that make noises separate to the music that emanates from it. This led to a certain atmopshere of deconstruction. Overall I found the event relaxing. I slipped into a pleasant reverie. 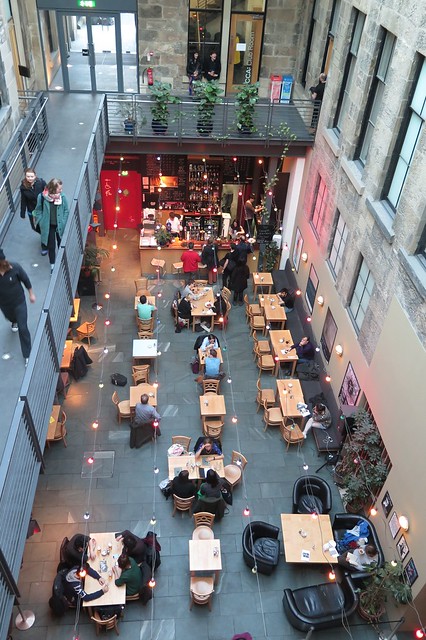 A bus brought us back to the supersoaraway CCA, where we went to have a look at an installation by Ying Yong (some kind of artistic group rather than an individual person, though one can never be sure of these things). This involved a lot of standing around waiting for them to get ready, which went on so long that some became convinced that the waiting itself was the art installation. But then we were ushered into a room to sit on the floor and experience what was more like a performance than an installation. They had a set which was kind of like a house or something and they were projecting images and they had masked people doing weird things. It was bizarre and enjoyable and I feel the world needs more things like this. 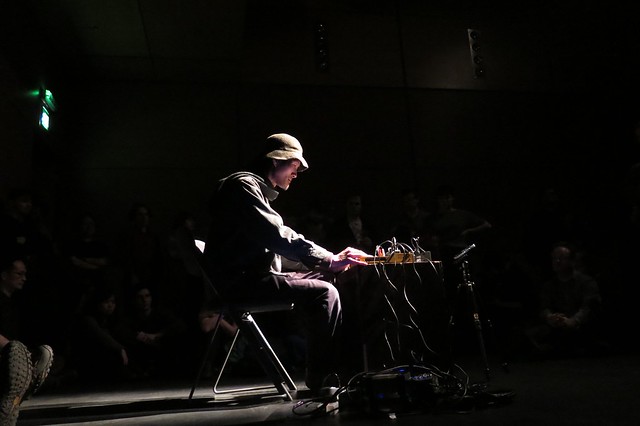 That was followed by performances from the three Taiwanese artists on whom that film was most focussed. Dino kicked things off with some electronic music that my friend Colin Ferguson described as being like Whitehouse without the misogynist lyrics. I am (thankfully) unfamiliar with Whitehouse save by reputation, but having seen their offshoot Consumer Electronics I know what he means. This was loud analogue sounding electronic music that hovered between drone and brain pulverising dissonance. I liked it.

The second piece was Lin Chiwei's Tape Music. The name suggests tape loops but it was not loops of magnetic tape that this piece involves. Instead there was a long piece of fabric tape with words (or syllables) written on it. Singers from the Glad Community Choir sat in a spiral pattern and passed the tape along. When a person had a word in front of them they sang it. They seemed to have bee drilled so that the tape moved along at a uniform rate, with people all or mostly having a word in front of them simultaneously. I think they were told what note to associate with a word, as recurring words appeared to keep being sung in the same way.

The piece had some false endings where the tape went blank for long sections before words reappeared again. But it did eventually end.

The last piece was Wang Fujui and an unnamed associate doing more analogue synth stuff. Or maybe it was laptoppy. There were visuals too. It was enjoyable enough but it delivered neither the sonic nor conceptual attack of its predecessors.

At that point we bade farewell to the Taiwanese sound artists and crossed the road to see Neil Michael Hagerty in Nice'n'Sleazy. This famously scuzzy venue was well suited to Mr Hagerty's rough and ready music. As you know, he was formerly one half of the famous Royal Trux but now he plays with his own band, a three-piece. He sang and played guitar while a guy in a suit played basic drums. The third guy mostly sat by the side of the stage drawing pictures but occasionally he joined in for backing vocals.

Mr Hagerty had a certain undead look to him, with his pronounced cheekbones and detached demeanour. His between song chat was a weird version of the kind of thing smarmy Vegas perfomers say (you know, "Thank you, you've been a lovely audience" etc.).

An odd feature of this concert was that afterwards several women reported fleeing from some creepy man who kept staring at them. I suppose Mr Hagerty might attract creepy men, as might the venue, but it turned out to be he same man (not me). He was apparently some kind of Glasgow Music Scene Character. I do not know if he stares at women at all gigs or if he was just feeling a bit starey tonight.

I escaped the attentions of this creepy man and so was able to enjoy the concert to the end. The performance had an entertainingly ramshackle quality of pure rock and I am glad I caught it.

This time I managed to stay up for the late night event, which was a disco in the Art School. Some geezer called Rabih Beani was DJing there. It was basically a techno dance set with random elements thrown in: Middle Eastern music, entire jazz albums, that kind of thing. The space was fairly small but it was hard to tell precisely how small because it was so full of dry ice that I could barely see my hand in front of my face. People wandered around for hours trying to find their friends, only to realise they had been sitting on them all the time.

I spent a lot of my time there dancing, partly because the music was great but also because the people I arrived with were turning increasingly Glaswegian as the night wore on (despite not being from Glasgow); coupled with the loud music this made it more or less impossible for me to understand anything they said. But the music was good for dancing. There seemed to be a lot of randomers present who had wandered in off the street without attending any of the other Counterflows events, including many attractive young ladies. At least I think they were attractive young ladies, it was hard to tell with all the dry ice.

And so to bed.

The final episode of my awesome Counterflows review comes your way tomorrow.
Posted by ian at 1:04 PM