At last I can reveal the true facts of my experiences at this festival. It took place in various Glasgow venues at the start of April. It is one of those music festivals where loads of varied artists appear, many of whom were people I had never previously heard of though they may be household names for you.

The festival ran over four days, starting on Thursday the 2nd of April. I caught the trail end of the Launch Reception in the CCA, which featured people giving speeches about stuff. Someone said that the way these things work is that the more money you have got from donor organisations the more speeches there will be, but also the higher the likelihood of there being free booze. At this one there were quite a few speakers but there was also free wine… except that the wine was inconveniently placed behind a crowd of people by the time we arrived. Fortunately we had a crack booze ninja on hand to slip in through the crowd and retrieve bottle. Jurassic Park.

The speeches included some stuff about how pleased they were to have a Brazilian strand to the festival this year, with transcontinental links being created with Novas Frequencias, a broadly similar festival in Rio De Janeiro. And then the speeches dissolved into some Brazilian bloke in a mask playing some discordant guitar music at us. It was intriguing and set the mood for the weekend: uncompromising yet playful. My friend and host Nessa described it as deconstructed Brazilian jazz guitar. 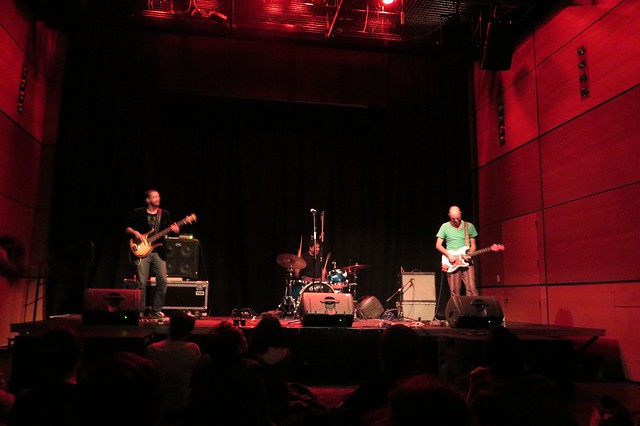 That was in the CCA's foyer. From there we moved to one of its theatre spaces for a performance by some more Brazilian people. These were the Chinese Cookie Poets, who were a guitar-bass-drums three piece. Their first piece combined feedback from the guitarist and bassist with rock animal drumming from Renato Godoy, suggesting to me that he might be the star of the outfit. Later pieces taxed the guitarist and bassist more. A most striking feature of this performance was how varied all the pieces were from each other, lending a mini-music-festival vibe to proceedings. There was nevertheless a certain Beefheart-Fall thread running through the concert. 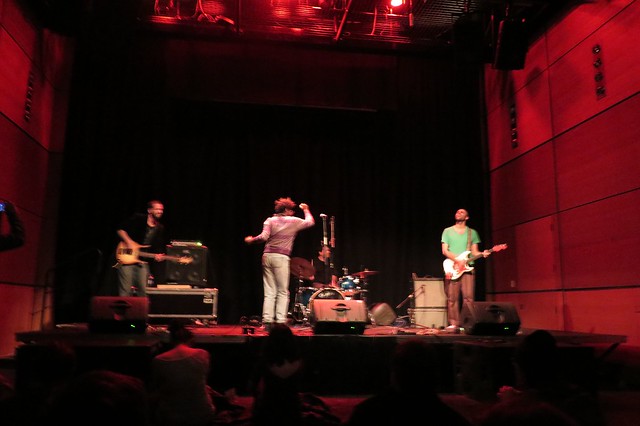 And then just when it seemed as though things could not get any more varied, they did. The band were joined onstage by Negro Leo, who was kind of a dancer and vocalist. He had a mop of hair and thick glasses and had a somewhat nerdy demeanour, delivering what sounded like stream of consciousness lyrics and dancing in a manner that I think was carefully choreographed faux amateur. I particularly liked the song where he seemed to be delivering both sides of a fraught domestic argument.

All in all the Brazilian combo provided a great opening for the festival. The band were fascinating and Mr Leo made a great temporary frontman. They were followed by a Brazilian DJ set but I was a bit puppy tired and had to crash (me being tired will be a recurring feature of this festival).

Come back tomorrow for more Counterflows action!
Posted by ian at 12:11 PM