I am belatedly posting about my time at the Counterflows festival in Glasgow. You can see all my posts on this here and a post on the festival's first day here.

Today's proceedings began again at the CCA with something called Experiment for Demolished Structures for 4 Voices by Richard Youngs. Mr Youngs is not someone whose work I was previously familiar with, but he was the featured artist of the festival. This was again in the CCA theatre space and saw the room arranged with four classically trained singer in the corner singing stuff that harmonised with the audience in the middle. The audience was standing rather than seated and encouraged to move around to explore the harmonics, though people maybe did not move as much as intended because the floor was a bit creaky and the performance was relatively low volume. In setup the piece had obvious echoes of James Tenney's In a Large Open Space.

The piece was fascinating butI felt that I missed a whole element by not being able to follow the words being sung. Operatic vocals can be difficult to follow even in a language you know. There were no surtitles or programme with the words and I was not really able to make out the lyrics, so I do not really have any idea what they were singing about. But that made the event all the more mysterious and intriguing, as the imagination had to fill in the gaps.

The crowd dynamics were interesting. People could move right up to and around the performers, but it was noticeable that they tended not to look at whatever singer was closest to them. Because the singers had such an air of concentration and were putting a lot of effort into the performance, people in the audience were wary of distracting them. Also those classically trained singers are famously handy with their fists if angered.

After that piece things got a bit Wanderly Wagon as we decamped form the CCA and made our way to the nearby Garnethill Multicultural Centre, where three different acts performed for our amusement. The venue's walls were lined with Taekwondo banners and Chinese dragon heads, giving some clue as to how multicultural the place was. 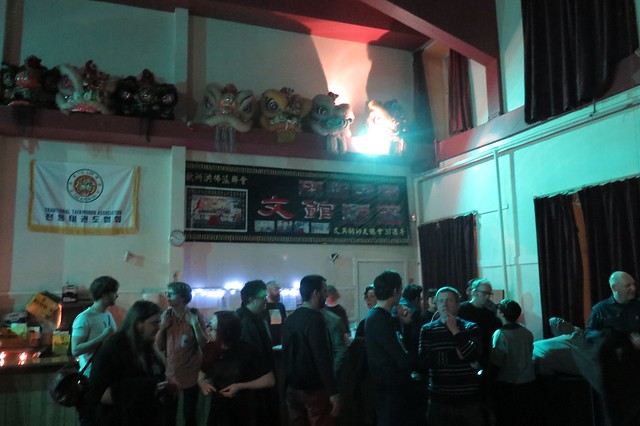 The first performance was by Angharad Davies & Sebastian Lexer. Ms Davies stood more or less in the middle of the room playing a violin while people sat on the floor around her. Mr Lexer did some electronic stuff, looping and treating the sounds Ms Davies was making. The whole thing was mesmerising and hypnotic. I liked it.

I like the next performance less so. This was by Hisato Higuchi, a Japanese fellow who sang while playing guitar in a manner that called to mind the Blues. Some of the instrumental bits were interesting but overall the performance was a bit repetitive and unengaging. I might have engaged more if the lyrics had been in English, not because I am some kind of racist who will only listen to anglophone vocals but because it would have served to differentiate the songs. 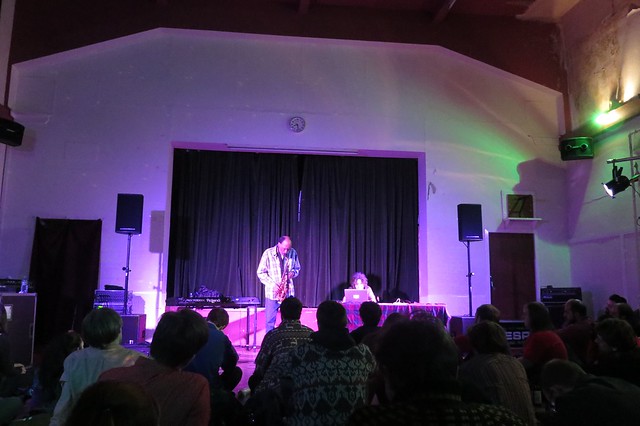 The last performance was a collaboration between jazz saxophonist Daniel Carter (who also plays keyboards) and Owen Green, who does electronic stuff. It worked surprisingly well, even though Mr Green's electronics were a bit laptop based. What he was doing had a live feel to it and lacked the sterility you get from watching someone tick away on a computer. Some of the electronics were triggered or influenced by him blowing into a tube, which lent things a certain physicality, as did his having to fiddle with knobs and stuff for other pieces.

For all the enjoyable jazziness of this last performance, largely driven by Daniel Carter, I think that maybe their set did go on a bit, though that might have been because I was somewhat *tired*. 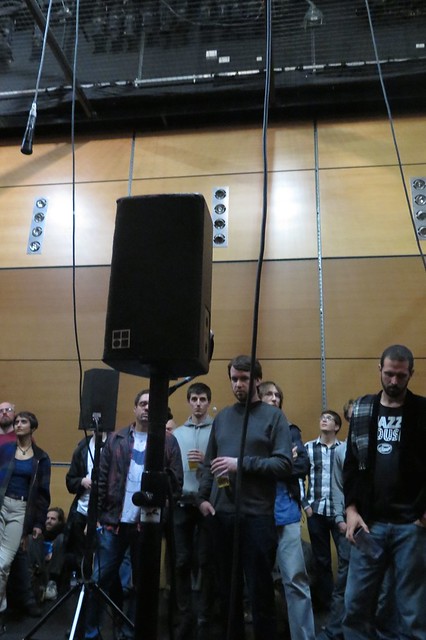 Back in the CCA there was sound installation piece by Florian Hecker. This appeared to be programmed rather than being in any way "live", though it is so hard to tell with these things (and what is "live" anyway? blah blah blah etc.). The piece had a load of speakers arranged around the theatre space from which sound emitted. People could walk around between the speakers or stay in one place or lie on the floor or whatever they wanted to do really. The sound was set up so that it seemed to move around the room from speaker to speaker. I do not remember so much about the sound itself, I think it was of the electronic burst variety. The overall experience was very enjoyable, with the combination of the darkened room, the unusual performance and tiredness working well to accentuate the strangeness.

With that event over we drifted downstairs to the foyer for a small nightcap. There was a band playing, who turned out to be called The Fish Police. The foyer is more conducive to drinking and talking than live music so I did not engage with them much at first, but once I did I realised that they were amazing. They were four smartly dressed young men (unlike some of the scruffs who had been appearing earlier) and they had a fairly standard guitar, bass, drums and vocals line-up. At first listen the music nodded towards pop reggae. 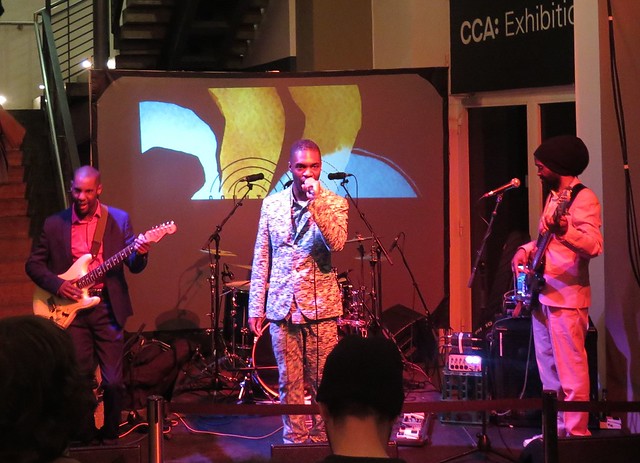 The singer's in between song banter made me think that the band might all be stoners, particularly given the lyrics of their songs being about funny mass cultural items or things they like eating. However I read subsequently that the singer is on the Aspergers spectrum so it could be that too. Either way it was an appealing kind of oddness.

Chicken and the eating thereof seemed to be a recurring lyrical theme, particularly in the insanely catchy 'Chicken Nuggets for Me'. The bassist commented that this was all a bit ironic for him, as he was a vegetarian (he may actually have been of the Rastafarian persuasion, or maybe like me he just loves animals). They also had a song about how much they like cocoa butter, another about a Japanese girl who reads so many books that she is always falling asleep, and another again about a girl with blue hair.

I should add that these tunes were all incredibly catchy. To hear the Fish Police is to love them. Everyone went mental for them.

Your favourite blog will have more Counterflows action tomorrow.

Fish Police was an old (ish) comic from, I believe, First comics, better known for the likes of Nexus and Grimjack. I wonder if that's where they got their name from. They do sound pretty ace.

Belatedly... I think the name comes from a Hanna-Barbera cartoon, but despite that they are indeed ace.