Power and Exploitation among the Meerkats 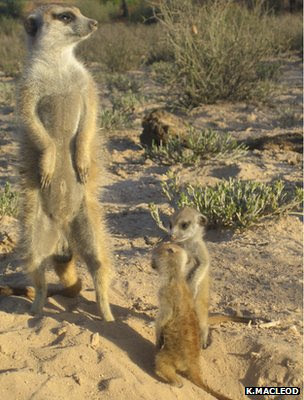 Africa. They famously live in large social groups, taking turns to watch out for predators and looking very cute while they do it. But there is a dark side to meerkat society. Although they live together, their societies are not ones based on friendly cooperation. Rather, the cute little animals live lives that are hierarchically ordered.

Meerkat groups are led by a dominant female. It seems that these boss meerkats reinforce their position by preventing junior females from breeding. The matriarch keeps the juniors down by killing their young or else by expelling them from the group. Expulsion is akin to a death sentence - in the harsh environment the animals live in, a solitary meerkat falls victim easily to predation.

But the dominant meerkat is not content with stopping the other females from breeding. Scientists, including Kirsty Macleod from the University of Cambridge, have discovered that the dominant female extracts a rent from the junior females - they are forced to look after the matriarch's young as a price for acceptance in the group. As well as minding the little pups, lactating females are obliged to serve as wet nurses for the matriarch's offspring.

At present the junior meerkats seem to be taking it from the alpha females. If they have any plans to improve their situation, it is through individual aspiration to replace the boss lady meerkat at the top of the ladder. This atomisation supports the maintenance of the current power structure. There are rumours, however, that some meerkats are beginning to whisper to each other that a 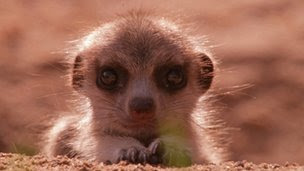 truly cooperative reorganisation of their social relations is required. It is even reported that some meerkats are beginning to form a vanguard party that will be able to strike for freedom when the time is right.

The roll of male meerkats in all this class conflict is curiously unmentioned in the one article I have read on the subject.