I saw this in London at the ICA. This is the new film from that Shane Carruth guy who made the intriguing Primer some years ago. Part of the appeal of Primer was that it was made for buttons but managed to punch way above its budget in terms of ambition and 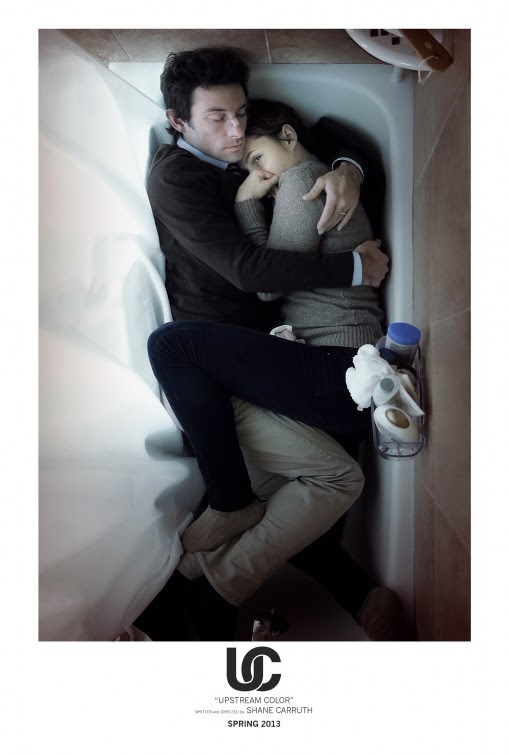 achievement. Upstream Color clearly has had more money spent on it and features a cast not limited to Carruth and his close personal friends and family members. Like Primer, though, it has a broadly SFnal plot but one where exposition is limited, so that the viewer spends a lot of time a bit confused as to what exactly is going on and as to how exactly the various odd events in the film fit together.

It is a hard film to say what exactly it is about. I mean it is hard for me to tell you what exactly it is about - if I was talking to someone who had seen it we could have a fruitful discussion on the narrative, but talking to someone who has not seen it makes it difficult to talk about without getting into the world of spoilers. So much of the appeal of this film is working out how the succession of scenes slot together, with the result that knowing too much about the film in advance would remove a lot of the enjoyment that comes from seeing it.

All I will really say is that the overall plot is driven by something that would appeal to people of forward thinking musical tastes - a man is stealing people's souls in order to make avant-garde ambient records. For all that this is very much presented as a terrible thing to be doing, any true music aficionado would have to wonder whether this is maybe a price worth paying. It would obviously be a bit rubbish for the people damaged by the extraction of their true selves, but the benefits for the rest of us would be quite considerable. Carruth I think shares this ambivalence, with the man who steals souls (in the credits as The Sampler) portrayed as sympathetically as someone who steals souls can be. As with Primer, Carruth does all the music in Upstream Color (broadly the same kind of low-key unintrusive ambient music that The Sampler is making), and although filmmaking is his game he must have a certain feeling for anyone making that kind of music.

Carruth is one of those total auteur filmmakers who writes, directs, does the music, and acts in his films. Budgetary concerns may be relevant here. In this one he does not play the lead, or even The Sampler, but a man who becomes romantically involved with the actual lead. She is played by Amy Seimetz and is someone whose soul has been stolen, suffering terrible collateral damage in the process. Aspects of their relationship I found rather confusing - were we meant to take it that he had suffered the same procedure? That would explain some things, like their shared tattoo and scenes where they were confused as to which of them had had particular past experiences. But the woman seemed so much more damaged than he was, which made me less convinced that he was like her, for all that the film does through pointers to suggest that.

That for me was part of the film's appeal - it suggests rather than explains, never giving us a "So basically what is going on is X" scene of blah blah blah exposition. I can see other people finding this frustrating and it may be a factor explaining Upstream Color's short run in the cinema.

One final thing I should mention is Amy Seimetz's hair. In the course of the film she manages to have three different hairstyles, all of them lovely.
A friend saw Carruth introduce Primer some years ago, and he spoke about the importance of hair in that film as a signifier of time passing. In this case it is both that and something that shows the Seimetz character in her initial happy state, then in the aftermath of psychic trauma and near total personal disintegration, and then finally as she takes on and overcomes her demons.

And here is the trailer:


Watching that makes me want to see the film again. Like Primer it is the kind of film that cries out for multiple viewings.

And here is the trailer for Primer:


Watching that makes me want to see that film again.