I have been thinking for years that I should really engage properly with the music of Creedence Clearwater Revival. I have never been that familiar with their music, apart from 'Bad Moon Rising' and 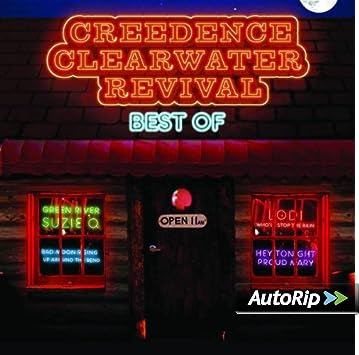 'Proud Mary' (and the latter mostly through covers) but have always liked what I heard and picked up the idea that the band are both good ("great tunes!") and interesting ("the first retro band!"). Plus, when I mentioned CCR on Twitter they were recommended to me on the basis that their frontman sings like a sexually aroused bear.

So I took the plunge and got myself a copy of this compilation, which looked like it was reasonably extensive and not put together by someone the owner of the music rights had not just met down the pub. Because you are all much cooler than I am you probably know all these songs already so I will not bore you with a run through, but I can reveal that my new favourite song in the world is 'Fortunate Son', in which Mr Fogarty of CCR sings about he was not born into privilege and did not get to dodge the draft or avoid his taxes (all in tones so up for it that the song is often mistaken by morons as being all about how the USA is number one). The cover of 'I Heard It Through The Grapevine' (or 'I Hoid It Through The Grapevine' as Mr Fogarty sings it) is great too, though I am a bit annoyed to have the cut down version rather than the one that goes on for ten minutes.

One general thing I am struck by with these songs is how on a first listen they come across as being deceptively basic, but on closer attention the playing and composition are a lot more complex. Maybe this juxtaposition is what makes people like them.