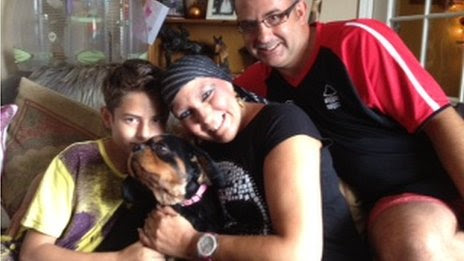 Sharon Rawlinson was surprised when Penny, her Cavalier King Charles, kept sniffing and pawing at one of her breasts. But when the dog stepped on her chest, causing pain, Ms Rawlinson examined herself and found a lump. She then went to her doctor and on to hospital for tests, which revealed a cancerous tumour. She is now undergoing chemotherapy and is going into hospital for an operation to remove the tumour.
Ms Rawlinson is not out of the woods yet, but thanks to her clever dog she has a fighting chance.

She "ignored her Cavalier King Charles Spaniel for months, but went for tests after Penny stepped on her chest, causing pain."
Possibly Penny, distraught at being ignored, took action to improve her visibility and cancered the woman RIGHT IN THE CHEST.