The Olympics: I was there

In an unlikely sequence of events, I found myself in London during the Olympic games. But I was not there for them, but rather for a number of cultural events. First up, I went to the Globe Theatre for a performance of Richard III, with Mark Rylance as the titular king. He played him as an evil version of Derek Jacobi in I, Claudius, the harmless differently abled person that everyone writes off until he is having you carted off to be executed. Richard is one of the great Shakespeare villains and it was impressive of Rylance to make him something other than a scenery-chewing monster.

Later that same day, I met some other people (who included my beloved) and went to see Selda playing in the Meltdown festival. The Turkish sensation was the reason we had come to London. If you are not Turkish then if you know Selda at all it will be from the reissue of her first album by Finders Keepers, or because people like me keep putting tracks by her onto CD-Rs. Her first album is an interesting record, in that it manages to effectively combine Selda's folkie-protest songs with an accompaniment that mixes Anatolian psych, early electronics and some traditional Turkish instruments. As previously noted, this kind of thing should not work but in that case it does.

The live concert repeats the same format, more or less. Selda sings, other musicians play keyboards, guitar, drums, and a saz, a Turkish instrument similar to the bouzouki or suchlike. Selda's voice still has it, she has not gone all softy rock or smooth jazz, her band are great, so it was all good.

What was funny, though, was how Turkish it all was. Particularly in London, when you are at some ethnic music show, there is always the question of whether the audience will primarily be Western hipsters or members of the particular ethnicity. At this one there were a lot of Turks present and if they were not the majority the event certainly felt like it was being primarily run for them. Selda yapped away onstage in Turkish between songs, cracking jokes that had her compatriots chortling and leaving us befuddled. And she played the songs so that they featured a lot of call and response stuff, which I and my fellow round-eyed devils found a bit confusing. They also waved Turkish flags from the stage, which some people may have found a bit disconcerting.

That all sounds like a moan, not at all, it was a big bag of fun for this cultural tourist.

We did quite like that the concert started and finished early, meaning that we were then able to go for pints to a divey spot called The Hole In The Wall with which our friend "Dave" had a certain familiarity. It is near Waterloo and serves troglodytes. 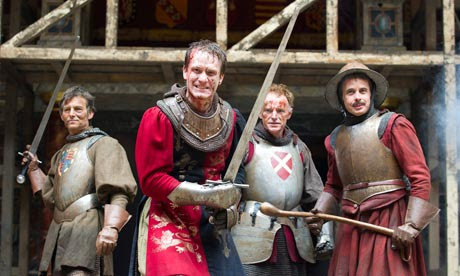 The next day my beloved and I saw Henry V in the Globe, in which King Henry V invades France and stuffs the French out of it. It seemed like a jolly business. At the end of the play they did what they always do in the Globe - the cast do a big dance number in lieu of the more normal kind of bowing actors are famous for. The actor who was playing the French princess Henry V marries seemed to step out of character and be really enjoying the dancing - and then I remembered, she is an actor, it is her job to project emotions that she may or may not be feeling.

We also visited the British Museum and, in the company of one Mad King Ken went for lunch in the famous Gaby's Deli. Their falafel sandwich proved to be as nice as promised.
Mark Rylance in Richard III image source