Maybe It's Your Fault

My favourite music radio programme is Nova, on Lyric FM. It features an engaging mix of modern composition, wacky electronica, and generally odd avant garde stuff that does not get a look-in anywhere else. It is basically the only music radio programme I listen to regularly, so it is hardly surprising that Lyric keep moving it to ever more inhospitable time slots and have recently halved its weekly time allocation. 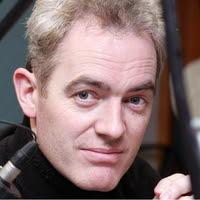 Nova, presented by the amiable Bernard Clark, has a variety of formats. Sometimes it just plays a random selection of musical pieces (kind of like other radio programmes, only with more Stockhausen), but sometimes he does themed programmes. Episodes focussing on the work of one composer or artist can be a bit hit-and-miss, as Clark can sometimes pick artists where I join the plain people of Ireland in their chorus of "what is this shite?" For all that, the themed programmes can still be interesting when a more promising artist or scene is given space for intense exploration.

A recent episode took a different tack again, bringing us a lot of yap and a lot less music. Clark had some people from the world of music in the studio with him (a composer, someone from the Contemporary Music Centre, maybe someone else; I do not have their names to hand), and they had a bit of a chin wag about The State of Contemporary Music in Ireland Today.

The discussion was interesting, but one thing I was struck by was the somewhat whiny sense of entitlement that seemed to seep from the participants. I do not mean an entitlement to the earning of a decent living, something most artists and indeed people generally share. It was more that they seemed to feel entitled to have their work listened to, and seemed implicitly or explicitly to see it as a monstrous injustice that contemporary music was not blaring out of the radio and being played in the National Concert Hall every night of the week. One of the participants drifted towards seeing the lack of contemporary music programming as basically the result of some great reactionary conspiracy. He also came out with a surprisingly rockist line about the mass audience being turned against modern composition by being force-fed "bad music". This is an oddly relativist position – if people can be made to like any music by having it forced on them, then what makes one type of music better than another?

The whole thing struck me as a bit strange. When I have come across the views of people involved in other forms of minority art (including other kinds of minority-interest music), they seem far more accepting of the idea that their difficult and unconventional work is never going to attract a mass audience. With contemporary music, I cannot but think that it is the nature of the music itself that confines it to the margins – much as I love modern composition, when composers abandoned melody and hummable tunes they largely left behind what most people consider music, so they cannot really be surprised when they find that they have left behind the audience as well.

I was also struck by the rather underachieving ethos that some of the participants in the programme had. The Contemporary Music Centre produces CDs of hitherto unrecorded work by modern Irish composers. When asked how they measured the success of any particular release they issued, the guest from the CMC replied that simply publishing the CD counted as success enough, seemingly whether or not anyone ever listened to it anywhere in the world. I wish that Clark had pressed her on this, as it seems colossally wasteful to be recording work and pressing up discs without any thought as to who is ever going to listen to them.

Another thing on the programme struck me as something to throw out to the the many people who read Inuit Panda. The panelists mentioned a couple of times how expensive it is to record orchestral works, something that sets modern composition aside from other forms of difficult musical endeavour. I can well believe that getting a full orchestra together to record something would cost a mint. What I found myself wondering, however, was whether the march of technology was showing any signs of allowing a reasonable simulacrum of an orchestral recording to be generated on a computer. I do not mean something that would be indistinguishable from a recording with a full orchestra, or even something close to that, but a synthetic recording that would at least give the listener a reasonable impression of what an orchestrated recording would sound like.

Does such a thing exist? If not, why not? It would surely be an invaluable tool to contemporary composers, as they could effectively produce demos of their work themselves and then post them on the internet as a way of touting for business from concert programmers and the like. It would also be a great way of getting a rough version of their music out there, which surely must be something they would be interested in.

This has been part of my series on making new friends in the world of avant garde music.

An inuit panda production
Posted by ian at 9:50 AM

I also have a great liking for twentieth-century developments in compositional technique, but dodecaphonic and serialist works have had several decades at this stage to find an audience, and have failed to do so. I'm not sure whether the artists on Nova you mention are using these techniques, or something else equally unpopular.

It's hard to know what future such music will have when it cannot muster a following large enough to even count as a "cult" following. I suppose its use in cinema in creating atmospheric and disorientating effects will probably be its lasting legacy.

I don't think anyone does serialism any more... wasn't that killed off by minimalism and people finding that it was just too hard to make anything musical with it? And it was kind of pointless.

Mentioning cinema is interesting, but for many of us films like those of Kubrick have served as our entry into the world of weirdo contemporary music.