Scientists in China are dressing up as Pandas. The scientists work in the Panda breeding centre in Wolong, from which it is hoped to reintroduce Pandas into the wild. The scientists are donning Panda-suits to stop the baby Pandas in the centre from becoming acclimatised to people. 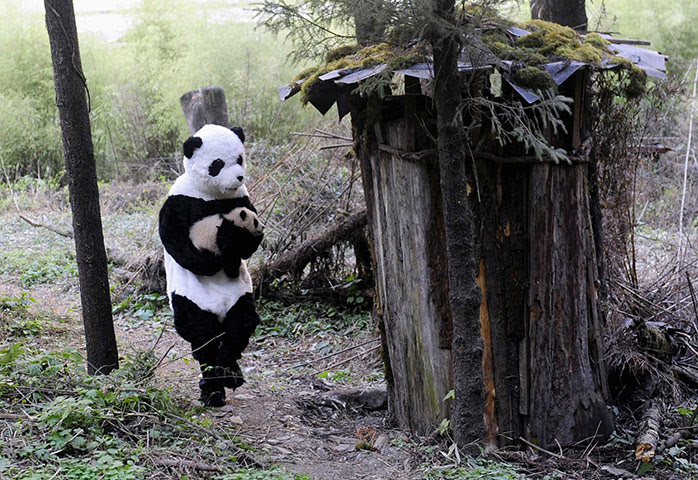 My knowledge of Pandas is surprisingly limited, but I suspect that the Chinese attempt to increase Panda numbers by introducing more Pandas into the wild is based on a false premise. Pandas are famously slow to reproduce – lady Pandas are only fertile for a couple of hours a year, so if they do not get it on in that time then they will not be producing a little cub.

The slow reproduction of the Panda is often seen as the problem causing their low numbers, but I think it is more likely to be a sensible evolutionary response to the environment in which the loveable black and white bears live and their diet. Pandas eat more or less nothing but bamboo, a plant astonishingly lacking in nutrition. A Panda needs to eat an awful lot of bamboo a day in order to remain healthy and to have enough energy to amble from one bamboo grove to another. This requires a low population density, as too many Pandas in an area will denude it of bamboo and lead to a food crisis. This makes the infertility of lady Pandas quite sensible – if she produces too many cubs then she and her young will starve to death.

The corollary of this is that the Chinese attempts to reintroduce more Pandas to the wild are doomed to failure. The released Pandas will only be able to survive by displacing existing Pandas, if they are being released into territory with a near maximum density of the bears.

My other heretical theory about Pandas is that they are not actually that likely to become extinct any time soon. Recent estimates put the number of wild Pandas as high as 3,000. That is more or less the same as the total wild population of all Tiger species. I reckon that Pandas have a couple of things going for them which will ensure their continued survival. Firstly, they are really cute and everyone loves them, with that everyone crucially including the Chinese government. Secondly, they are now living in fairly remote areas where they are not too likely to suffer habitat loss through human encroachment (I am open to correction on this). Thirdly, and perhaps most crucially, no Panda body part is a key ingredient in Chinese traditional medicine. I am therefore reasonably confident that the cuddly bears will be with us for some time to come.

An inuit panda production
Posted by ian at 9:34 PM

3000 might not be enough. Depends on the Minimum Viable Population http://en.wikipedia.org/wiki/Minimum_viable_population

Which is hard to determine.

Homer Simpson spent the night in a zoo dressed as Sim Sim the panda. He ended up as the "lady" in a romantic coupling with the male panda. So you need to be careful when you dress up as a panda.

Hi Anonymous. Well done with all your work on Wikileaks. I suppose 3000 Pandas might not be enough (could always do with more pandas) but is it any less than there was in the past? I do not get the idea that there was once a huge population of pandas ranging over half of Eurasia, so at 3000 they could be no worse than they were before. I suppose their survival prospects would be improved if that 3000 was concentrated enough to prevent in-breeding but not so concentrated that some unpleasantness could wipe them all out. Ah well, let's see what happens.

Andrew - where is this zoo?