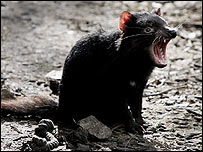 I have already mentioned Tasmanian Devils, animals so fierce that they are driving themselves to extinction. Their extreme ferocity is proving to be a greater threat to their continued existence than habitat loss, as their continuous fighting with each other is causing the spread of a virus that leads to them growing repulsive tumours in their mouths and dying of starvation. Scientists project that they will become extinct in the next couple of decades, unless they stop being so fierce. As a Tasmanian Devil move away from ferocity is not considered likely, the BBC reports that scientists are trying to move uninfected animals away from their infectious kin, in the hope that this allows the species to survive. I hope it does.

In other fierce animal news, the BBC reports that India's notorious maqaque monkeys have claimed the life of SS Bajwa, Deputy Mayor of Delhi. He was set upon by some of the loutish animals, who forced him off a balcony to his death. This is only the latest and most extreme outrage perpetrated by this uncontrollable animals, believed by many to be embodiments of the God Hanuman. Inhabitants of Delhi are probably hoping that there is no repeat of the 2001 events, in which the city was terrorised by an entity that was half-man, half monkey, and all monster.
Posted by ian at 8:34 PM

Tasmanian devils may be very fierce, but they have never defenestrated a public official.

A very fierce grain of rice.