This is a Jon Savage compiled record of music by homosexuals. It runs the gamut from tracks where the gayness involved is very oblique (or tongue in cheek) to in your face tracks like '53rd & 3rd', before finishing with some cheese-tastic disco nonsense as a way of celebrating the mainstreaming of gay culture, at least in music. A lot of these tracks are very novelty, and here as examples of a type of music rather than anything anyone would say is actually good music, but there are some great tunes here, notably Tornados b-side 'Do you come here often?' (Joe Meek releases an overtly gay record to a world that does not care). 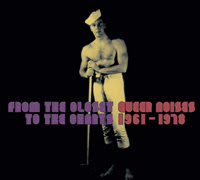 I suppose the track I most like on this is the one by Jobriath... he was some guy in the 1970s who was one of the first overtly gay pop stars (or would-be pop stars; his career tanked). His track suggests that he was some kind of genius who invented a new musical genre that combined pop with the baroque.

The record has a nice sailor on the frontcover, so it might be useful to you for research purposes.
Posted by ian at 2:33 PM