By October 1918 things were looking pretty rough for the Germans. The Allies had launched a series of offensives in France that were driving the German forces ever closer to the border. The German forces were increasingly close to breaking point, though some units were still capable of dogged resistance. Elsewhere, Germany's allies were beginning to collapse. Turkish forces in the Middle East had been shattered in a series of battles that left British forces advancing towards Anatolia. Allied advances against Austria-Hungary were hastening the end of that ancient empire, which opened up the prospect of Germany being invaded from the south. 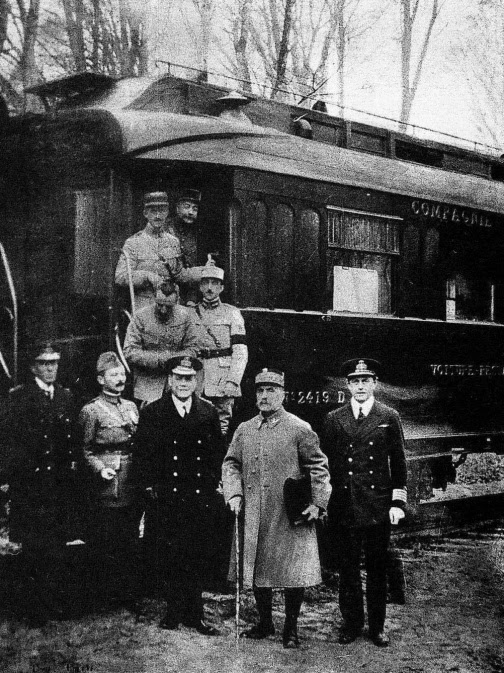 When the German fleet was ordered to sea to stage a suicidal attack on the superior British, the sailors mutinied. This triggered an outbreak of strikes and insurrection throughout Germany that overthrew the monarchy and brought a civilian regime to power. Civilian politicians went to sign a ceasefire deal with the allies, though it was the General von Hindenburg who ultimately ordered them to sign, which they did at 5.00 am the 11th of November. Fighting was to end at 11.00 am that day. By this point Germany's allies had all thrown in the towel.

The armistice was notionally just a ceasefire rather than a permanent end to the war, but its terms left the German armed forces in an impossibly weakened position. Germany was to hand over aircraft, submarines and artillery pieces to the allies and the German fleet was to be interred at Scapa Flow in the Orkneys. German soldiers withdrew from France and Belgium; the Allies occupied the west bank or the Rhine and bridgeheads across that mighty river. The allies were now in a position to dictate peace terms to Germany, which they did at Versailles in 1919.

This is the end of my blitz through some key events of the First World War. If you fancy a more drawn out approach to the Great War, why not check out my live blog of the war's events. You can see it here.
Posted by ian at 11:11 AM