The Russian revolution and Brest-Litovsk peace treaty with the Bolsheviks meant that the Germans could transfer a huge number of troops from the eastern front to France. Erich 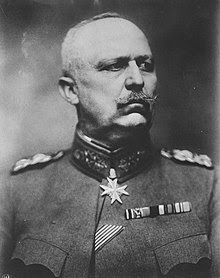 Ludendorff, the German commander, used these to launch a spring offensive, which he hoped would end the war before American forces arrived in strength. Spearheaded by highly trained stormtroopers using infiltration tactics, the offensive was named der Kaiserschlacht - the Kaiser's Battle. German soldiers were promised that this was the offensive that would end the war with German victory.

The attack began on the 21st of March 1918, preceded by a short but intense bombardment. The British defenders were shattered and fell back. The Germans made the kind of gains not seen by either side since 1914 and for a brief moment it looked like they were winning a decisive victory. But the Kaiserschlacht ran out of steam and the offensive ground to a halt.

Ludendorff launched follow-up offensives, capturing more territory but suffering increasing casualties and failing to achieve a decisive victory. With the failure of the last offensive in July, the jig was clearly up for the Germans. Their army was not the force it was and American soldiers were now arriving in increasing numbers. The greater resources of the Allies meant that they could easily replace losses in a way unimaginable for the Germans. At this point Germany should have sued for peace, but the war would continue to November.

image source (Wikipedia)
Posted by ian at 11:14 AM