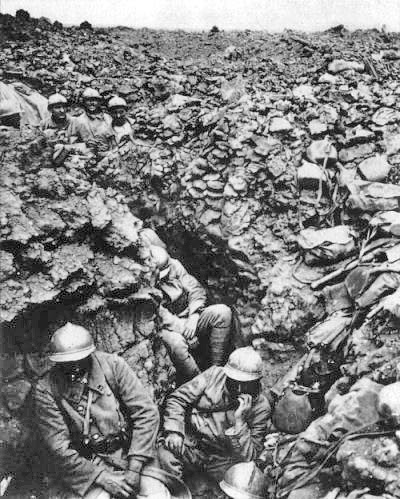 In February 1916 the Germans launched an offensive against the fortified French town of Verdun. The aim was not to take the town but to inflict such terrible casualties on the French that they would not be able to continue with the war. The French did come close to cracking, but the Germans themselves also suffered nigh unendurable casualty levels. The battle continued until December 1916. It made the name of Philippe Pétain, the French commander during the battle's most desperate phase; he would go onto become a Marshal of France, though he would end his life in ignominy.

In the anglophone world this battle is less well known than the Somme or Passchendaele, but for the French Verdun is the quintessential meat-grinder battle of the First World War. As a horror that could never be repeated it would haunt the imaginations of French decision-makers in the 1930s, as they faced a resurgent Germany.

image source (Wikipedia)
Posted by ian at 11:07 AM