The sensual growl of the male Koala


Scientists have long been astonished by the low growl of the male koala. The marsupial bear emits this strange burping sound to let lady koalas know that he is in the area and ready to see to their 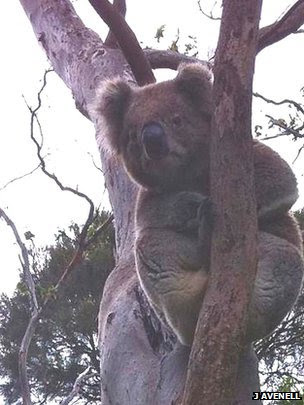 sexual needs. What has confused scientists is how such a small animal has been able to make such a low pitched noise. Were their vocal tracts to be structured in the normal manner, koalas would apparently need to be the size of an elephant to make such strange rumbling tones.

But the vocal tracts of koalas are not like those of other animals. Scientists have discovered that, as well as their larynxes, koalas also have an extra set of vocal folds specially designed for male koalas to sing their sensual song.

It is unclear as to exactly what the male koala communicates with his low rumbling moan. Perhaps lady koalas can identify individual males from their calls and decide to stay away from that cad who gave them koala chlamydia last autumn. Or perhaps the quality of the growl is a signifier of the health and reproductive fitness of the male koala. Or perhaps, as the Guardian suggests, the purpose of the male koala’s growl can be understood with reference to certain human sexual behaviours.

Is it a snore? Is it a burp? It’s a male koala trying to attract a mate