continuing my frank account of a weekend spent singing with the Unthanks, on this occasion reaching the true and unabridged account of how I engaged in a bout of wrestling with Ms Rachel Unthank.

I mentioned last time that we went for a walk on the beach and then went to a pub. Read on for an account of what happened there.

That trip to the pub was probably one of the highlights of the weekend. It was a very nice pub and you know, what could be better than singing loads of songs than singing loads of songs while drinking beer in a pub? I was curious as to what the other drinkers made of it all, as I could imagine being a bit pissed off if some weirdoes showed up in my local to sing about some stupid bird on a raft. I think some people did evacuate the lounge for the music-free bar area, but those who remained seemed to enjoy it all. I was talking to one guy who was a farmer from a bit away who seemed rather amused by it all, even joining in with some tune that required people to knock on the table at certain points. There was also an old couple who looked like they might be tourists who gave the impression of being pleasantly surprised by finding themselves in the middle of the kind of pub sing-a-long that never really happens any more.

There was also at least one local who had just shown up in the pub because he knew we would be there, so that he could treat us to a song or two. The great tune he sang was this one called 'The Funeral Song', which starts off as a poignant tune sung by a young man whose father has just died, until we reach the chorus:

It then continues in a rather "well-I-never" fashion.

Another great moment in the pub was the performance of some comical Percy French tune by sisters Jennifer and Anna. I also loved an Irish singer (whose name I think was Orla) singing 'Raglan Road', one of those songs that gets me every time.

Back in the farm, that evening after dinner we were treated to a small chamber concert by the Unthanks, at which they performed a number of songs. And after that it was fun and games and a free for all sing song. The first game was Face To Face, something that apparently arose in the folk clubs of the North. It sees two singers standing very close to each other, staring into each other's eyes, and then they sing. The first person to smile, laugh or stop singing loses. You are also disqualified if you start jigging around to the music. I fancied the idea of entering, but sadly I know no songs all the way through (a shocking admission) so I had to sit it out. The range of songs people used was quite fascinating - Jenny got to the final with something like the 'Hallelujah' chorus, while another guy did well with what sounded like a second division punk tune. Eventually a woman called Angeline Morrison won the coveted prize (a mug prepared by Becky Unthank).

The next competition was Finnish Sailor Wrestling. This has nothing to do with music. Rachel and Becky Unthank demonstrated. Basically, two people stand close enough to each other and try to push each other over, but you are only allowed make contact with the other person's palms. The first person to step back loses. So it is kind of like a stripped down version of Sumo and may not actually have anything to do with Finnish sailors, though I reckon it would be very difficult to do on the rolling deck of a ship.

I am not known for my skill at violent activity but I was quite keen to give this thing a go. However, it seemed to be only women taking part in it at first, and I did not want to be that guy who went up to wrestle with a woman (either I would win against her and look like a bully or she would beat me and I would look like a sap). Eventually one woman was up there who seemed to be able to handily defeat all comers, and it looked like she would win the Finnish Sailor Wrestling mug. But then this guy got up against her and after a rather aggressive attack he defeated the woman (whom we later discovered to be his wife).

Finnish Sailor Wrestling is decided on a last man standing basis, so this guy was now about to win the prize. Or was he? No, someone challenged him, and was swiftly defeated. Then my beloved took him on - but his aggressive tactics eventually wound her down. I could not take this lying down - anyone who beats my girl has me to answer to, so I went up to take on the swaggering bully*. At the very last minute I wondered if maybe, just maybe, I was heading for an embarrassing defeat, but even so I resolved to give this battle my all.

The champion had some slick moves, proving adept at keeping back his hands and then darting forward to make sudden attacks to push me back. But he was unable to unbalance me, and once I connected with him I pushed him over rather easily. HA HA HA HA!

That left me the reigning champion. I invited challengers in a manner that was meant to be comedically threatening but which maybe convinced people that they actually would be looking at broken limbs if they were to take have a go against me. Possibly to prevent me winning the tournament after a single fight, Rachel Unthank took the field against me, leading to the wrestling bout referred to in the title of this piece. As an experienced player she was a tough nut to crack, but in the end I was able to push her over. I was as surprised by this as anyone.

None dared face me after that, and so I won the mug that named me as the champion at Finnish Sailor Wrestling. 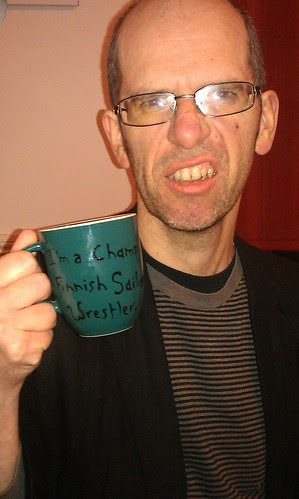 After that it was random sing-song time. George Unthank led this somewhat. He was good at pushing the ball around the room so that everyone got a chance to sing, even people who were a bit *shy* and so needed to be egged on a bit, while at the same time not forcing anyone to sing who did not want to. He did say that everyone should sing, implicitly echoing the Butthole Surfers with his comment that no one would be happy if they went home thinking "I wish I had sung that song last night". And nearly everyone did sing, including some who were obviously a bit *shy* and not too used to singing in public. I think I would have sung something myself… if I had bothered my arse to learn the words of any songs that would not sound ridiculous without musical accompaniment. So instead I chatted to the only other person present who did not know any songs - an acupuncturist from Cornwall. Now my ambition is to learn off the words of a few songs, with Civil War classic 'The Battle Cry of Freedom' being first on my list.

After a farewell workshop, Sunday saw us making our way off from Seahouses. My beloved and I arrived in Edinburgh where we had a series of adventures; these may eventually be detailed in future post.

*this guy was not actually a swaggering bully but it makes my victory all the more impressive if I portray him as one.

Feeling Sublime (Face to Face winner Angeline Morrison has gone on to release a record, whose video you can see here)