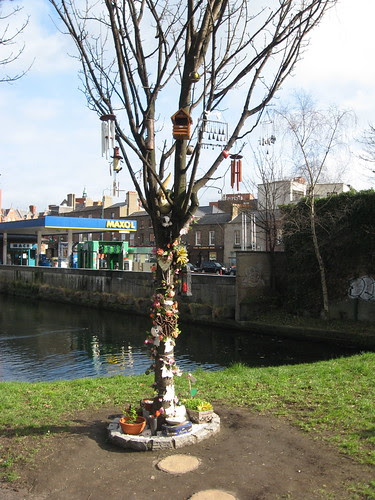 Just south of the Baggot Street bridge, on the west bank of the Grand Canal, there is a memorial to a woman called Nicola Cox. I discovered it by chance a while ago and have been fascinated by it ever since. I have taken a number of photographs and posted them on Flicker. You can see them here. 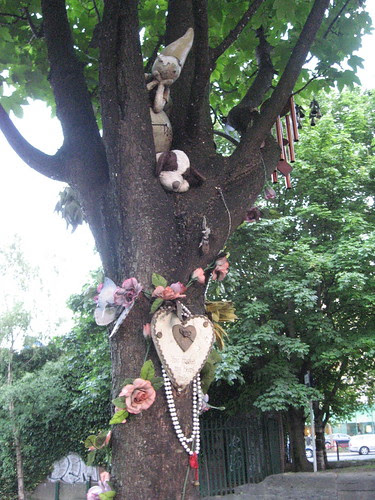 Originally I had no idea who Nicola Cox was. I think other people may also have been perplexed, as I notice a lot of people coming to my pictures of the memorial after searching on Google for things like "Nicola Cox Canal" and the like. Two comments eventually provided some information. One said that the memorial had been created by a man called Paul, partner to the late Nicola Cox (though note comment below from Samantha Cox saying otherwise). Another comment was posted by Nicola Cox's brother, saying that she had met her end through unresolved foul play. 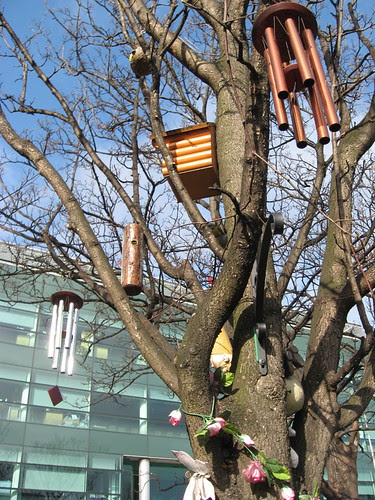 Nicola Cox has had a beautiful memorial created to her. My pictures do not really do it justice, so I encourage you to go and see it yourself. An otherworldly peacefulness to be had when looking at the decorations on the tree, listening to the sounds of the canal and the faint ringing of the wind chimes above. 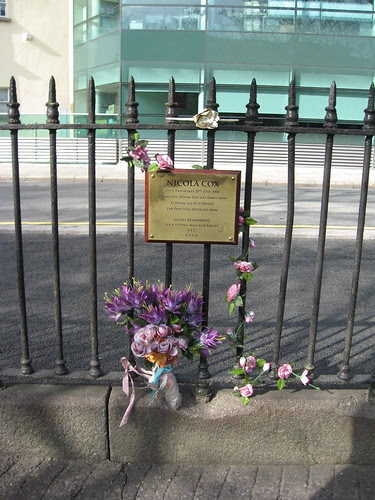 Thanks for the beautiful words its truly touching and means so much, glad people stop and take notice and shes not forgot xxxxx

You're welcome Samantha, I'm glad you liked the post.

I really did she was my sister and means so much people take time to stop and look at her tree and take a minute. For the record I had nicolas plaque made and our dad who passed 4 months after nicola started the work on the tree... But just for facts to be made clear nicola was in a solid relationship and engaged to Willie and not Paul as someone had suggested so I just want.to make that fact clear.. Also find it extremely creepy and uncomfortable that it has been suggested any young.girls in the area come speak to Paul if passing tree and I would visit.tree a lot and never see PAUL sitting by broken hearted so I would kindly ask that this "passer by" person who is leaving.comments on your lovely post would kindly get his facts straight as it is unfair and not nice on my.sisters fiancee Willie. Thank you so much again Ian and everyone else for beautiful words and comments means a lot. My sister was beautiful inside and out and although her death is unresolved I live in hope that some day justice will.come our way. But in the meantime her memory deserves respect and if comments are gonna be made feel free to mail me for facts as my family were disturbed to read what we did about PAUL

Hi I saw this today its a lovely memorial! I couldnt find anything relating to it on line did the lady drown?