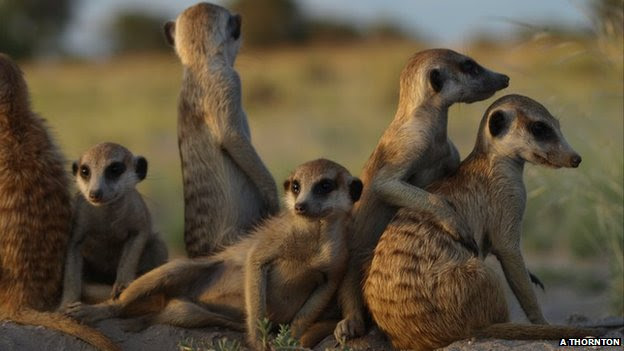 Meerkats are cute little animals who live in southern Africa. They are famous for their cooperative social structure, but their society is not egalitarian. In a given Meerkat troop there will usually be a higher ranking male who bosses around the other males of lower status (I am not sure where female Meerkats fit into this hierarchy).

Now scientists have discovered that the subordinate Meerkats are better at solving problems than their higher status fellows. Meerkats were presented with openable glass jars containing scorpions (a tasty treat for the social mongooses). High status Meerkats rapidly gave up trying to extract the scorpion, but the lumpen-Meerkats would toil away until they had the jar open and the scorpion scoffed. Persistence seems to be the characteristic that allows the subordinate Meerkats to solve problems. They appear to open jars by trial and error, and when presented with a new jar identical to the old one they spend the same length of time fiddling about with it until they open it, suggesting that they are incapable of learning and remembering how to do it. But scientists believe that this persistence is an important characteristic of junior male Meerkats, as they are the ones who leave their home troop to go off in search of mates. High status Meerkats, meanwhile, are like high status humans – they do not need to solve problems as they can profit from the work of others.

More (includes film of a Meerkat solving a problem)

An inuit panda production
Posted by ian at 12:32 PM