Join me, gentle reader, as I take you with me on my recent trip to London, capital city of the British Empire. Eschewing the variable charms of the Bloomsbury guesthouses, my beloved and I planted ourselves in Kensington, where Imperial College lets out student accommodation over the summer to holidaymakers like ourselves. The facilities here proved most agreeable, and I would recommend any readers from outside London looking for a more cost-effective accommodation in the big city during the summer months to seek out this place. 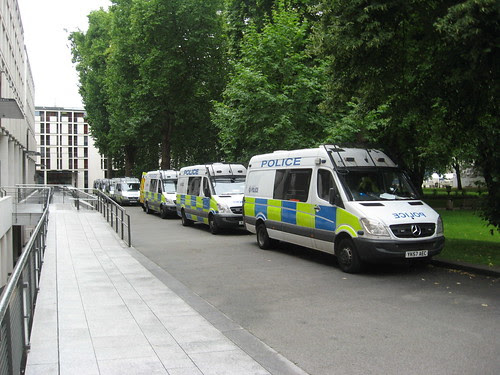 We were in London the week after the city was torn apart by rioting. I had been a bit worried that feral youth would once more rise up against The Man while we were in the city, but this was not to be. In any case, we would have been able to sleep soundly in our beds, as it seemed like half of South Yorkshire's police force were billeted in Imperial College.

We were not in London just to hang out with men in uniform. A variety of cultural activities were on our agenda. Using our membership, we visited the British Museum to look at the exhibition there on mediaeval reliquaries (objects used to store relics of saints, said relics being anything from bits of their clothes to chips of their skull). Compared to some of the other British Museum things I have been to, it was surprisingly quiet – maybe people are more interested in exotic foreign religion and stuff than in the Christian heritage of Europe's past.

The reliquaries exhibition more or less ended with the Reformation, when the emerging Protestants took against relics big time and shamed the Catholics away from the more lurid excesses of reliquary reverence*. You can see the point of the Protestants, but they did come across like a load of kill-joys – religion may have become a bit less crazy but it also seemed to have had a lot of the fun kicked out of it.

We also made two visits to the exhibition on science fiction in the British Library – more or less a journey through the form's history using book covers as a means to throw out discussion points. It also had some fascinating audiovisual input, of which my favourites would be the snippet from Orson Welles' radio drama of The War of the Worlds, a clip from the recent silent and faux expressionist film of 'The Call of Cthulhu', and a short clip from the 1950s TV version of 1984. That last one seemed to have been a hoedown of British talent of the time – Nigel Kneale wrote the script, Winston Smith was played by Peter Cushing, and Syme (the guy who shites on about newspeak to Smith) was played by Donald Pleasance. No wonder Prince Phillip liked it so much. It is a great pity that the holders of copyright on this work have deliberately kept it from public view.


*unless they are living in Naples.

An inuit panda production
Posted by ian at 9:51 PM