NaNoWriMo is this world wide writing exercise where people try to write novels of at least 50,000 words in the month of November. Pure quantity is the only ground of success – if you write 50,000 words, you win, even if your so-called novel is complete nonsense. Some have criticised NaNoWriMo as adding to the 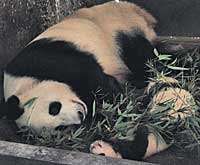 world's mountain of bad writing, but I think they are missing the point. Sure, the novels finished on 30th November are all going to be pretty poor, but for the writer they are useful exercises in actually getting the words out, in forcing him- or herself to sit down and write day in, day out. Even writing something that is very bad is a useful exercise for would-be writers, so long as after the fact they are able to recognise what was so bad about what they spewed out.

I think also that the process of just banging out the text must be of some assistance in generating ideas. While there is nothing to stop NaNoWriMo writers from plotting novels in advance, the process of trying to reach 50,000 words in a month encourages a kind of breakneck writing that leads the author easily into tangents, some of which may prove promising for future development into proper works of fiction.

Another reason for trying NaNoWriMo was outlined to me by one Mr Dale Cozort. He said that many people think they would like to try creative writing sometime, but that right now is not a good time for it. However, it turns out that now is never a good time. With NaNoWriMo, you just accept that while now is not a good time to start writing, you are just going to do it anyway and see what happens.

If you are doing NaNoWriMo, you need to write an average of 1667 words a day through the month of November. That is quite a lot, but if you get onto a roll you can expect to produce a lot more than that on some days, so it is perhaps less daunting than it initially sounds.

My own experience of NaNoWriMo is mixed. I have attempted it twice, in 2008 and 2010. In 2008 I succeeded in producing the required number of words, hitting a groove early on with a basic plot that kept suggesting new episodes. It did of course get increasingly incoherent and outlandish, with early hooks never being resolved and strange leaps of logic being required to bring things to a conclusion, but that is the kind of thing you tidy up in subsequent drafts. As the writer of that piece, what I found most interesting about the process was being able to write 50,000 words of a novel for which I only had the vague premise "detective story about missing wife" before sitting down to start writing it; an inquiry from my beloved as to whether it would feature pandas before I started writing pushed into a whole other direction.

In 2010, on the other hand, everything went wrong. I had the beginnings of a plot worked out beforehand, but the writing process proved much more difficult. I was slow off the mark for a variety of reasons and then I found that the words were not flowing for me. One problem was that I started losing confidence in the outline plot I had come up with in advance, and another was that the economic situation at the time was depressing me. And my perhaps unwise decision to attempt to pastiche 19th century novels made the words far less easy to spew out. Eventually I gave up when it was clearly no longer even remotely possible to write the required number of words by month end.

I am not sure what this indicates. Maybe I just got lucky first time round, but I think the lesson really is that to complete NaNoWriMo you need to get in there and start writing from the word go, and to write sufficiently quickly that you do not have time to start doubting the quality of what you are producing. In any case, what you are producing will probably just be rubbish anyway, so get on with it.

I posted my 2008 NaNoWriMo book on my blog for a limited period and then never got round to deleting it. You can see part one here. Or ask me for a PDF copy. I never posted my 2010 attempt anywhere, because I hate it.

An inuit panda production
Posted by ian at 9:40 PM

Email ThisBlogThis!Share to TwitterShare to FacebookShare to Pinterest
Labels: writing

I think, like albums, the second novel is much more difficult as you have already used up years worth of great ideas on the first one. Also, there's probably an impulse to raise the bar with novel 2 and try to make some progress on your first attempt. Which is obviously harder, and less fun.

but last time I wasn't so much using up my great ideas as having them as I went along. Or at least having ideas.