By now you surely know the score with (((SUNN))) – capes, dry ice, high volume, irresistibly slow guitar lines that do not sound like guitar lines, non-existent or incomprehensible vocals, ritualisation, and so on. At this concert, the Sunny Boys were a bit hampered in how theatrical they could be. Their dry ice was setting off the smoke alarms, so they were unable to bury the stage as much as they surely would prefer. So they had to perform on a stage where most members of the band were relatively visible. The horror. Their vocalist sat more or less on top of the limited dry ice dispenser they had, which was something of a shame, as I would have liked a closer look at him. He seemed to be a tree, or a tree stump, albeit one with a limited ability to move and make strange guttural noises. Later inquiries revealed that he was none other than ATTILA, one of the surviving members of MAYHEM. 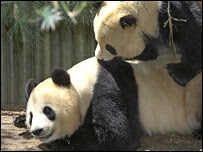 The concert was a bag of fun. As is the way of SUNN-O))), the band playhed very slow guitar chords, occasionally holding their fists in the air or giving us the goat's head salute (I replied with The Devil). Deadly stuff. A lot of people had come along to check out the Sunny Boys. Some of them were lured in by the spectacle, while others found it all too repetitive and boring, so they scurried off to see if Rosie Red Rash were playing somewhere (these being some lovely ladies who have formed a band that reputedly had people fleeing from Reds on the previous day).

The leavers missed the Spinal Tap-esque end of the concert. The grunting tree had made his way off the stage, but the band were still playing, when one of the hooded figures went over to one of the others and punched him in the face. He then decked him again, so that his victim fell against the wall of speakers, causing them to fall over. Oh dear. And that was the end of that.