I have really got out of the cinema habit. It is quite conceivable that the only thing I have seen there is Dracula (the first Hammer version, with Peter Cushing and Christopher Lee). It features a lot of bombastic music and women who turn all sexy once Dracula has started doing his thing with them. It is not the best of the Hammer films (or even the Hammer Dracula films), but it is a good example of the Hammer template. I would love if cinemas would show more of these, with Dracula - Prince of Darkness, The Devil Rides Out, Brides of Dracula, Frankenstein Created Woman, Kiss of the Vampire, and Quatermass and the Pit being ones I would particularly like to see again. Is Countess Dracula (the one with Ingrid Pitt playing real life posho maniac Erzebet Bathory) a Hammer film? I never saw that one, but I reckon I would like it. The other unseen Hammer film I would love to catch is The Legend of the Seven Golden Vampires, an attempt to marry the Hammer-style vampire film with Chinese chop socky hopping vampire cinema. I gather it is seen as a failure, but the premise surely marks it as a work of genius.

Just in case you are not an aficionado of Gothic horror, Hammer were a British film company who evolved into a style of film based around eroticised versions of horror classics (though in so doing they were picking up on features always there in source material like Stoker's novel or Carmilla, Sheridan Le Fanu's lesbian vampire story). Typical Hammer features include: women in low cut tops, location non-specific central European settings, girls boarding schools in which the pupils are all played by women in their mid twenties who spend a lot of their time helping each other into their nightclothes, superstitious locals, bumptious comedy characters, numerous "My God!" moments, driven heroes almost as fanatical as their fiendish adversaries, surprisingly lush sets, bombastic music that often spells out the name of the main character, and so on. Hammer also made some other great films like The Wicker Man or The Nanny (this relatively obscure film featuring Bette Davis in particular highly recommended), but these do not fit the classic model. Nor do such frankly embarrassing attempts to update the genre as Dracula AD 1972 (Dracula and some hippy Satanists in swinging London, OMG) or The Beast Must Die* (big game hunter v. werewolves to blaxploitation soundtrack). But the classic Hammer films have a certain charm, even the duff ones, and I would love to see them again. 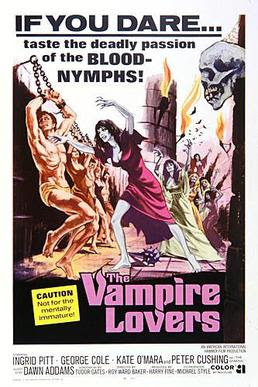 The pictures are from the Wikipedia entries for Dracula and The Vampire Lovers (an adaptation of Carmilla). I've not seen the latter, but it looks like a classic Hammer film.

This was meant to feature in the latest issue of Frank's APA, but somehow failed to do so.

*not actually a Hammer film, though it feels like one, or an attempt to do one set in the then present day
Posted by ian at 1:37 PM

Spot on, Ian! I agree with you completely, more Hammer on the big screen. Personally 'Quatermass and the Pit' is one of my all time favourites (despite the crummy effects used to show a race memory of Martian hordes; but then Carpenter didn't do much better in his 'Ghosts of Mars'). Nigel Kneale's script was brilliant; so full of invention. Then there's Bette Davis in 'The Nanny'; thanks for reminding me of that one. And I even liked 'The Beast Must Die', with the gimmicky 'werewolf break' near the end (and yes that wasn't Hammer, but Amicus). I liked a lot of the Amicus ones too, particularly the anthology pieces like 'From Beyond the Grave' and 'Dr Terror's House of Horrors' (good old Milton Subotsky).
'Countess Dracula', with Ingrid Pitt as Bathory, was a Hammer flick.
Bit of trivia, though 'To the Devil a Daughter' (with a very young Natasha Kinski) was the studio's last full-length horror cinema release, they released an update of Hitchcock's 'The Lady Vanishes' with Elliot Gould and Cybill Shepherd in 1979. Unfortunately the studio went bust before the premiere (only to resurface later with TV's 'Hammer House of Horror' etc.).
Anyhow where do I sign the petition?

Glad you liked the Hammer stuff. I am thinking of starting a new Inuit Bikini Scarlet Carwash series in which I write about all of my favourite Hammer films in turn. It should keep me away from the cute animals for a while.

Forgot to go to this in the end! Can Hammer and Cute Animals not work together? Still Hammer, please don't hurt them.

dracula rocked on the big screen