Doctor Who and THE DAY OF THE DALEKS 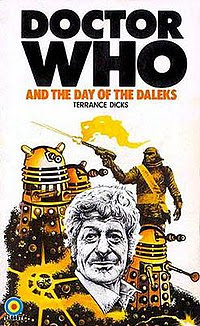 In an oh-the-nostalgia kind of way, I am re-reading this classic Terrence Dicks adaptation of a Pertwee-era Doctor Who story. This was always one of my favourites of the Target novelisations, and it still has it. The story is one of those ones about people from the future coming back in time to change their past. In this case, the future is one where a nuclear war left the world so weakened that the Daleks were able to come along and take over, herding the survivors into monster concentration camps and forcing them to engage in back-breaking toil for unspecified Dalek purposes.

The two best things in this are the future resistance people and The Controller, the Daleks' quisling administrator of what was once Britain. The resistance people are plainly modelled on the kind of ker-azzy urban guerrilla and Palestinian militant types you have knocking around in the 1970s, with their favourable portrayal mirroring the almost film star qualities of people from then like Carlos The Jackal or Leila Khaled. At the same time, the book is not afraid to portray some of them as being just a bit too driven in their commitment to the freedom struggle. And in an interesting touch, they all have Middle Eastern sounding names.

The Controller, meanwhile, is probably the book's most complex and sympathetic character. His job involves being permanently bossed around by the Daleks and threatened with extermination should he fuck up, but for this he gets status and various little luxuries that his enslaved fellow humans can only dream about. Much of the book is told from his point of view, so you get a lot of the rationalisations he uses for self-justification. The Daleks are invincible, after all, so he might as well make the best of it for himself. And as Controller, he can do little things here and there to make the lot of the humans slightly less terrible. Or so he thinks.

Some years after reading this for the first time, I actually saw The Day of the Daleks on video. Like most Pertwee era Doctor Who, it was pretty rubbish. The lesson I have learned from this is simple – for Doctor Who from before Tom Baker, stick to the Target novelisations.

(book cover from the Wikipedia page on Day of the Daleks)

If you would like to read more about Day of the Daleks without bothering to read the book itself, the Kaldor City people have an article about it: Day of the Daleks, but Alan Stevens with Fiona Moore. The are looking more at the TV series than the book, and there is a worrying air of Continuity Nerdism about the article, but it does give a taster.
Posted by ian at 10:34 PM

Email ThisBlogThis!Share to TwitterShare to FacebookShare to Pinterest
Labels: Books, Doctor Who

I didn't really experience many of those novelisations as a kid, but I do have fond memories of the one I did read, 'The Giant Robot', also by Dicks. It was the only one in the class library and featured a robot made from a metal capable of growing. Or so I believe. And yes, Tom Baker was King of the Doctors.

It was a Robot made of LIVING METAL, which caused the Robot to grow to enormous size when some bright spark fired a disintegrator ray at it.

"Robot" (as the TV story was called) was the first Doctor Who story I ever saw.