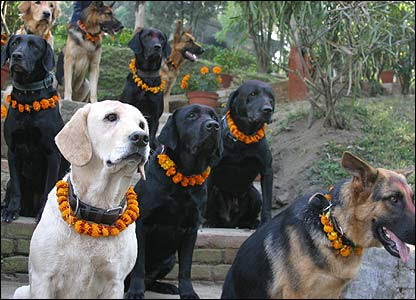 Nepal is currently celebrating the festival of Tihar, the local version of Diwali. The second day of the feast is known as Kukar Tihar; on this day the Nepalese honour the country's dogs.

It's all down to some religious thing in the Mahabharat, where dogs accompanied some Dharmaraj Yudhisthir guy to heaven. Or maybe it's because dogs guard the underworld. Either way, the dogs are not complaining. On this great day they are garlanded with flowers and given lots of treats to eat. Even street dogs - normally treated rather badly and lucky to scrape a living from scraps - are fêted on Kukar Tihar.

The BBC has more on this festival: In pictures: Nepal dogs honoured
Posted by ian at 9:11 PM

You should google 'Avesta' and read what this says about the goodness of dogs and how they should be honoured.


It's in the Vendidad and gives very detailed instructions on canine care. Who knew the Zoroastrians were such dog lovers?

"For each of your three mounthfuls of bread, the Dog shall be given one"
Katharine

Aww, I need to go. NEED. One of my classmates was from Nepal. TAKE ME, Sabine!