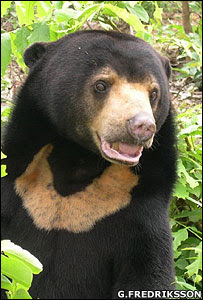 The Sun Bear is the world's smallest bear, but it is also the bear at greatest risk of extinction. The Sun Bear lives in south east asia, but habitat loss has seen Sun Bear numbers decline by 30% in the last 30 years.

The BBC and the Guardian both have reports on the problems faced by the Sun Bear and other bears:

The Guardian also has a gallery in which the survival prospects of various bear species are discussed: Bears under threat
Posted by ian at 12:12 AM

Oh noes. Not the sun bear. :-( I will save him by taking him in and cuddling him every day. Maybe I will even wash his fur with Lush shower gel.

I hope you don't get furry pervertalists coming round to your house in bear suits claiming to be Sun Bears.