The Sword of the Lord of Fury 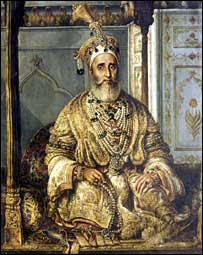 I got on a bit of a roll with stuff to do with India after reading Mike Dash's book, so with a book token birthday present I acquired a copy of William Dalrymple's The Last Mughal. Dalrymple is an author I have been interested in for a while, hearing good things about his books From the Holy Mountain (an account of travels in modern Turkey, Syria, and Lebanon, tracing the religious history of these places) and The White Mughals (about early officials of the East India Company who took local wives, adopted local customs, sometimes converted to Islam, and generally went native; it is referenced approvingly in Thug). The Last Mughal is about Bahadur Shah Zafar II, the last Mughal Emperor. Originally the East India Company acknowledged the Mughal Emperor as its real or notional overlord, but by the 1850s, the septuagenarian Zafar was a 'chessboard king', ruling in Delhi over a court of literary and artistic luminaries but with no real power whatsoever. The Company had furthermore given notice that they were going to block the succession of his heirs and terminate the reign of his dynasty.

If The Last Mughal was a badly written melodramatic play, there would be a couple of scenes setting forth what I have outlined previously, and then suddenly someone would run onstage shouting "My Lords! The Indian Mutiny has begun!". This is essentially what happened, with Indian troops of the Company in Meerut revolting against their officers and then charging to Delhi to massacre every Christian they could find, but sparing British converts to Islam (some of him became enthusiastic supporters of the rebellion). The mutineers the Emperor to lead them and, deciding that he had nothing to lose, Zafar gave the rebels his blessing, so becoming the titular head of the greatest anti-colonial struggle the world has ever seen.

That's about as far as I have got in the book thus far, but given that Zafar is indeed the last Mughal then it is safe to predict that the uprising is eventually crushed and everything goes a bit sadface. The book thus far is great crack, both the picture of Delhi before the mutiny and then as the sword of the Lord of fury is unleashed being fascinating. Dalrymple has apparently used Indian sources on the Mutiny that no one else has bothered to use before, making this the first account of the struggle to seriously engage with the Indian side.

It is also a book with some great vignettes. My current favourite is the description of some English officers impatiently waiting for their dinner, only to hear one General Nicholson introduce himself with a cough before saying "I am sorry, gentlemen, to have kept you waiting for your dinner, but I have been hanging your cooks". Likewise, the antipathy of one John Lawrence for junior Company officials of a "cakey" character is also rather chortlesome.

If you have been to India then maybe you have seen some of the places described in the book. I understand that the Red Fort (Zafar's palace) still just about stands in Delhi.

LATER – the book gets very sadface when the rebellion collapses and the British storm Delhi and kill everybody. Anti-colonial struggles are much more entertaining to read about when it is colonisers being kebabbed. Oh well, such is life. Zafar ends up seeing almost his entire family exterminated, but was taken alive himself by the British and sent into exile in Burma. While there he reputedly wrote a mopey poem about how bad his life had turned out: My heart is not happy

I recommend Dalrymple's other books, The Age of Kali and City of Djinns, particularly the latter. Good writer, if a bit smug.

I saw a picture of him on the BBC, and I did not like the look of him at all. I was hoping for some ancient John Julius Norwich type, or failing that a young fogey.

City of Djinns is fantastic! Very clear portrait of Delhi (I spent a lot of time when family were based over there). He's a bit "required reading" for the ex-pats over there!

The Red Fort still stands. There is less of it inside (it was made into a British barracks after the mutiny iirc) but the walls still stand. Independence day (in March I think) is marked by a parade in front of the front gate. The best bit is that it's facing Old Delhi, one of the best places for exploring evah!