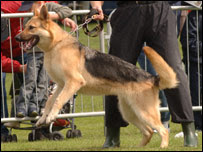 Jake is three year old Alsatian who works with the Northumbria Police. He recently saved a woman's life by finding her in bushes, in which she had collapsed, just an hour after she was reported missing.

"The fact the woman was found so quickly undoubtedly saved her life," remarked PC Alistair Cairnie-Coates, who works with Jake. "Jake knew he'd done well because he sensed the sheer feeling of relief that we all had when this woman was eventually located."

Jake lived in animal rescue centre before joining the police force. He had originally been found as a seven week old puppy, tied to a lamppost after having been abused by fireworks.