This is a film by everyone's favourite Richard Ayoade and is adapted from the 19th century novella by Fyodor Dostoyevsky. The film is set in a strange retro-futurist version of the 1980s, but it is still easy to see its origins in the kind of novel that begins with a table of ranks of the imperial Russian civil service.

The film features Jesse Eisenberg as an office drone in a large company. His life is not one of success, either professionally or romantically. One day finds that a new employee has joined the organisation, one who looks exactly like him (and is also played by Jesse Eisenberg) except that the Double is suave, confident, popular and a go-getter. They are initially friends but soon become rivals, as the Double starts stealing his ideas at work and moving in on the attractive lady colleague (played by Mia Wasikowska) that the main character has been ineffectually dreaming about. As is the case of films and books about doubles, there is a certain ambiguity as to whether the Double is a real person or the product of the main character's fevered imagination. Either way, Eisenberg is great in both roles, especially when he is playing one of them impersonating the other. 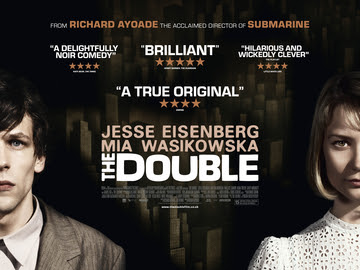 Some have compared The Double to Brazil, and it is not easy to see why. Aside from retro-future settings (albeit different retro-future settings), both films have a distinctly paranoid and borderline dystopian air. The Double also has a claustrophobic feel, with no exterior shots (or no exterior daylight shots). But I think the film is still its own thing. It does not really have Brazil's conflict between humdrum reality and the romantic world of the imagination. Instead it follows more in the tradition of its source material through such 20th century writers like Kafka, presenting us with the surreal tale of a put upon man ground down by rules and the need to conform. I liked it, but maybe that is because in many ways it resonates with my life.