This was an event organised as part of the Dublin Writers Festival, one of those things that always looks interesting but with which I never properly engage. It was the presentation of a song cycle about people who used to live on Hirta, an island in the St. Kilda archipelago. Alasdair Roberts is the Scottish folk singing sensation with whom I am increasingly fascinated. Robin Robertson is a poet who visited the island and who may have been the initial driver of the project. I think maybe that Mr Robertson must have written the words of the tunes with Mr Roberts then setting them to music, but they left their writing process opaque. At the event, Mr Robertson introduced each song and talked about the general subject and then left Mr Roberts to sing it, accompanied by his astonishing guitar playing; the only exception to this was when the poet read some of his own poems that had not been set to music.

St. Kilda is very remote. Apparently it takes several hours to get to it from the Outer Hebrides. The evening presented a portrait of the life lived by the St. Kildans from neolithic times to the 1930s. The people on Hirta lived not by fishing or farming but by predating on the gannets and other seabirds who nest on the other rocky islands of the archipelago. They would boat out to the bird island and then climb up the rock face to catch the birds in their nests. The first song tells the story of a man who lost his footing on the cliff, falling hundreds of feet into the water below. The St. Kildans never learned to swim, but the faller's death was delayed by all the dead seabirds stuffed into his belt, whose buoyancy gave him a temporary reprieve from drowning. His friends could do nothing but watch as he bobbed up and down in the water before eventually going under. What was striking about all this was that the song ran against the grim subject matter, with Roberts being characteristically jaunty in his singing and playing in the face of the awfulness. This would not surprise anyone familiar with his work.

Other tunes evoked different aspects of life on the islands. Something of a tension is created between the pagan ways of the islanders and the god botherers of the Presbyterian Church (or the Kirk, as it is known in Scots English). The Kirk did its best to stamp out pagan practices and enforce conformity to reformed Christianity. This conflict is explored in the song 'The Drum Time', about the Kirk's successful extirpation of the islanders' traditional musical practices. That is one of the few tunes on which Roberts' jauntiness cracks and the music mirrors the sadness of the lyrics.

Roberts' music also goes a bit sadface on 'Exodus', about Hirta's final evacuation in the early 1930s. By then the population of the islands had fallen below a viable level. Increasing awareness of what the world had to offer made the islanders less inclined to remain on a rainswept rock in the middle of the Atlantic, and they petitioned to be taken away to the mainland (which in this context might still have meant an island in the Outer Hebrides). 'Exodus' gives a sense of how terribly wrenching it must be to forever leave somewhere that has been the home to your forebears since the dawn of time. For me the sadness of the parting was conveyed by the grim detail that the islanders had to drown their dogs before departing, as they could not take the animals with them (for reasons that were not explained). 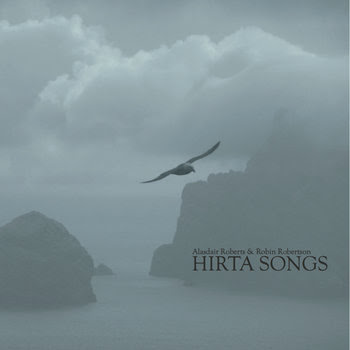 I have said more about Mr Roberts than Mr Robertson here, which is not too surprising as it was the singer's past musical form that attracted us to this event. I am also not known for my love of poetry. However, Mr Robertson deserves his own praise for the lyrics he has written to this. There were also a couple of poems he recited himself that were very effective; the unaccompanied spoken voice suits the bleak subject of life on Hirta. 'The Well of Youth', an account of a haunting, was particularly striking.

We bought the record after the concert and it is as beautiful listen, with the tunes featuring a slightly expanded line-up. But beautiful as it all is, I am glad that I am not living on Hirta.