v/a "Before the Fall" 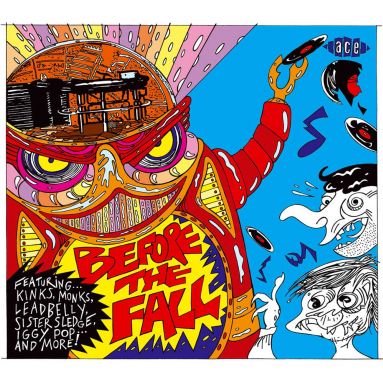 This is a compilation from Ace Records of tracks that have been covered by popular band the Fall. Some of these I had heard before, some I had not. Overall there is a bit of a bias towards '60s punk and broadly that kind of music, which I suppose reflects the kind of tunes that the Fall play themselves. But there some odd side steps, like 'Lost in Music' by Sister Sledge. The Fall covered that on The Infotainment Scan, the first Fall album I ever heard, and their version remains surprisingly disco, for all its Fall arrangements.

With other songs where I was hearing the original for the first time, the difference was sometimes rather striking. On 458489 A-Sides, 'There's A Ghost In My House' has an almost gothic post punk quality. On this compilation, R. Dean Taylor's original is revealed as a Tamla Motown stomper.


An odd track here is 'I'm going to Spain' by Steve Bent, a tune whose cover by the Fall I have never heard. It is a gentle song about some guy who has had enough of rainy England and is heading off to live out his life in Spain. But for all it's 'I'm off to the sun!' qualities, there seems a poignancy to it, as though the singer's heading off to Spain effectively marks the end of a life of failure. He does not actually seem that excited about his impending emigration and it might not be projection to imagine that his moving to Spain is code for suicide.

My beloved tells me that apparently 'I'm going to Spain' has some kind of reputation on some hipster website as the worst song of all time, which seems a bit unfair. I would not describe it as one of my all-time favourites, but there are definitely far worse songs in the world.

1. I have heard the Fall's version of 'I'm going to Spain', as it is on The Infotainment Scan, but I had forgotten this as I have not listened to that album in years as aside from two great tracks (not this one) it is a bit dull. Listening to the Fall cover again I would have to say that it is inessential.


2. It seems that it was actually Kenny Everett who invented the idea that 'I'm going to Spain' is the worst song in the world, by including it on a compilation called The World's Worst Record in 1978.

One song that is definitely far worse that 'I'm going to Spain' is 'African Man' by Iggy Pop, again a song whose Fall cover I have never heard. This is a song from the shite period of Iggy's solo career (i.e. nearly all of it) and it features Iggy singing basically racist stuff about the kind of primitive and fairly bestial life lived by African men, one of which he proclaims himself to be. The music is rubbish too.

[Oh wait, I have heard the Fall's version of 'African Man', as it is appears on Are You Are Missing Winner, a record I do not listen to that often as it justifiably has a reputation as the worst Fall album ever]

I will not go through all the songs, save to mention that there are many classics here, many of which you may have already heard. I suspect that most of my readers would find this record interesting rather than enjoyable, as you would have to have some interest in the Fall to enjoy it - enough to be curious as to the originals of these songs but without the kind of musical knowledge that means you have heard them all already.

Image source (from Ace Records, with a more useful description of the record's contents)