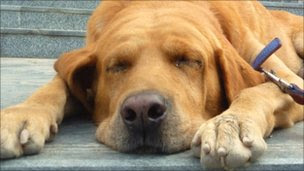 Scientists have made the astonishing discovery that dogs who are anxious when left on their own are typically more pessimistic than their more independent fellows. Dogs who bark, howl, or destroy objects while waiting for their owners seem to be concerned that they may end up being left alone forever. Calmer dogs are typically optimistic, and so expect that if their owner leaves them on their own then he or she will return at some future point.

Scientists are reputedly also working on a hypothesis that the Pope could possibly be a member of the Roman Catholic Church.

An inuit panda production
Posted by ian at 10:34 AM