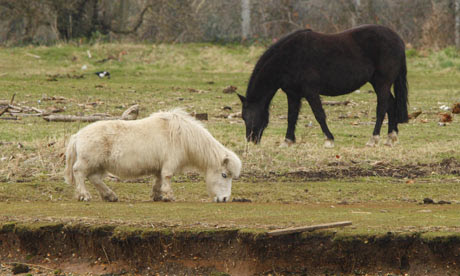 Fire services in Hampshire are being repeatedly called out to rescue a horse reported as being trapped by mud into which it has sunk. However, Mayflower is actually just a horse with very short legs. From a distance, it looks like her legs have sunk into the ground, even though Mayflower's ability to move remains uncompromised.

Mayflower's owner is apparently planning to put up sign informing passers-by that he is not stuck but just has short legs.

Martin sent me this link a few days ago! I hope to see Señor Stumpy once we're in Hampshire next month. <3