Now let me talk about a two Finders Keepers records recently acquired. First up there is their release of Selda's first album (with a couple of tracks from her second thrown in as a bonus). Selda is this Turkish folk singer, known as a voice of leftist protest against the suckass powers that be in that country. She had been on the go for a while before she made her debut record; from the accompanying photographs she looks like she was no spring chicken. Apparently she had been a well-known figure on the country's live circuit, but has never made it into the studio until 1976.

Live, Selda played with just her own acoustic guitar for accompaniment, but in the studio she was joined by a load of Turkish prog-rockers and electronic experimentalists. This should surely have smothered her sound and made her debut a piece of sludgy awfulness, but the combination works really well. You still get her strong voice and guitar pickings, but the accompaniment makes this a record to kill for. I suppose you could, in a very roundabout way, compare it to Nick Drake's Bryter Layter, in that like it the folkie base has a load of ornament added on that actually improves things greatly rather than making it shite.

I recommend this album highly, and not just for 'Yaz Gaztecti Yaz' (or the bop doody doo doo de de doo de de doo track as some might know it), the one you hear a lot at Andy Votel Djing events or on Scott Watkins TOADs. I like it so much that I ended up buying a second copy on CD (so I can rip it to iPod and eventually pass on the love by donating it to Oxfam). 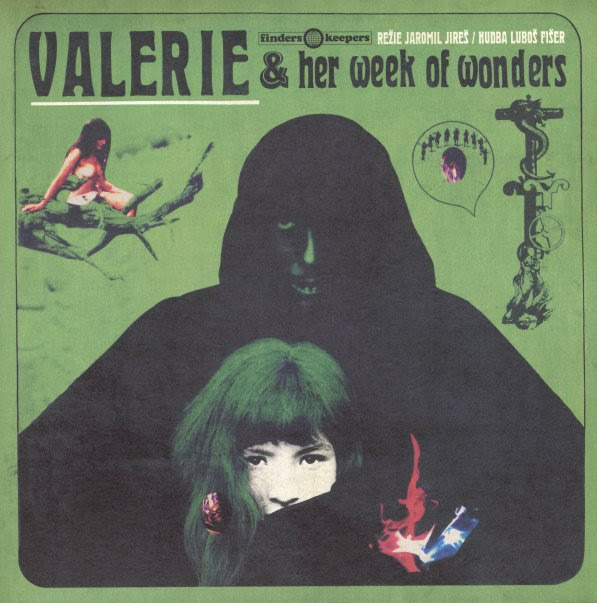 Meanwhile, on my recent food trip to Cork* I decided to buy another Finders Keepers record from the nice record shop down there. This time it was the soundtrack to Valerie & Her Week of Wonders. This is a Czechoslovakian film from the early 1970s, a kind of last gasp of the avant-garde scene that the 1968 invasion crushed. I have not seen the film myself, but I gether that it is kind like Alice in Wonderland meets Emmanuelle, only with more weirdo European stuff thrown in. The music is very evocative, but in retrosepect it might have been better if I had bought this on CD, as it is the kind of thing that would be nice to listen to in one go without having to change the record over. It would also be nice to listen to on the iPod while lying in bed.

* Another trip to Ireland's greatest restaurant, where I ate more stuff I now cannot remember.
Posted by ian at 10:23 PM

I love Panda... and just bought a Panda Bag from the following Blogshop:
panda.cwahi.net

Nice to meet you.