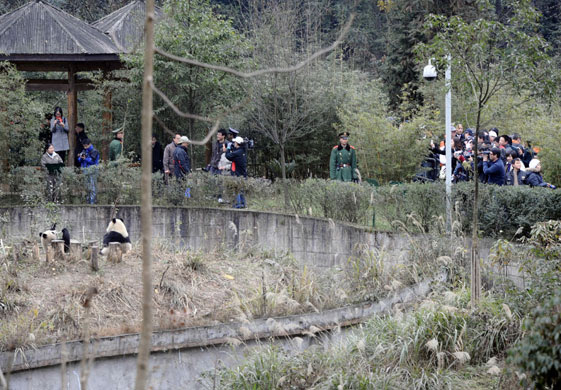 Along with a number of people we went to this DEAF event at which The White Noise were going to be playing, together with DJing from Broadcast and the lads from the Finders Keepers record label (or maybe it was the lads from the B-Music club; these are the same lads). What we were not expecting was a performance by some ladies called Pollyfibre. Wearing very tight silver spandex costumes and robot masks, they came onstage and did things to bits of fabric with scissors, irons, and stuff. All of this made unusual noises as they seemed to be heavily miked up. Their performance tended more in the direction of electronic art rather than music, making it all one of the most bizarre things I have ever seen. Deadly stuff, I hope they play again sometime.

The White Noise were billed as going to play their 1969 album An Electrical Storm... but they confounded explanations by doing no such thing and serving up instead some electronic music that owed more than nothing to contemporary dance music. I think a lot of people were a bit pissed off by them, but I found them rather enjoyable. I was rather amused by the way they performed 'Firebird', An Electrical Storm's standout track. They just played the original recording off a laptop while David Vorhaus sang over it. Awesome.

As you know, David Vorhaus is the man who recorded the ORCH5 sample for the Fairlight Synthesiser, this being that VOMP! noise you get on a lot of hip hop records and Kate Bush albums. He took it from the bit in Stravinsky's Firebird where the full orchestra comes in, and tonight he got his money's worth out of it by throwing it into a few of the tunes.

This concert was all on in The Sugar Club. Annoyingly, they no longer serve Brandy Alexanders, but we were able to relax back in plush seats and watch the action. Sadly, this meant that getting up to dance to the DJs was not an option, as the seats were too comfortable to leave.

Electronic Pandas
Posted by ian at 10:00 AM

damn, I meant to go to that Andy Votel thing but, er, failed. :(