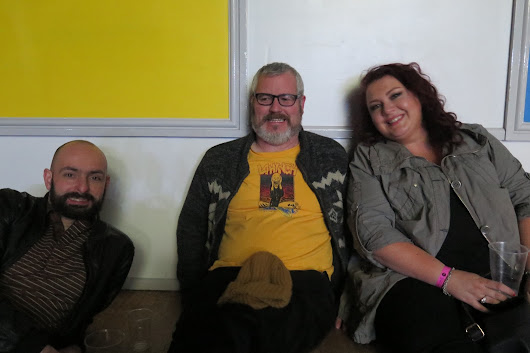 This is fourth episode of my exhaustive account of my visit to the last ever ATP festival in Prestatyn, which was curated by Stewart Lee. You probably don't need to read previous instalments, but if you want to you can see them here, here, & here.

On Saturday evening I saw The Heads on Stage 1, sitting at the back because I was a bit puppy tired. The Heads rock hard and were enjoyably full on. I followed them by a trip back to the chalet. On the way I met a man who was being bitten by his girlfriend. We discussed whether this meant he would turn into his girlfriend and would then go round biting other people, so that everyone present would end up being a version of her. 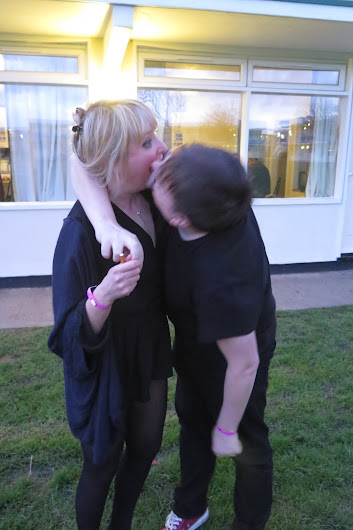 Then I saw The Ex, who are an ATP staple: I first became aware of them at a Camber Sands festival and have seen them at ATPs on a great many occasions. Perhaps this engendered a certain laziness on my part that meant that I arrived down late for their performance on Stage 1, missing all but the last couple of songs. They're still great though. The Young Lad has settled into his role as replacement for the original singer and the band continue to give the impression of enjoying what they do. In fact their general positivity reminded me that the bad vibes of Friday had by now largely dissipated. That said, they finished by saying that they looked forward to seeing anyone who was going to the Manchester ATP, as they were also playing that; this may have been the ATP equivalent of the guy in a horror film who says, "Just nipping down to the cellar, I'll be right back". 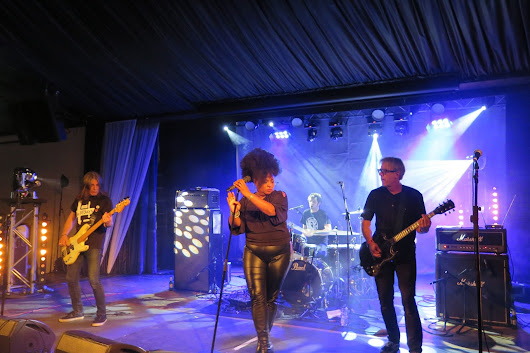 I was planning to see The Fall but they were taking forever to setup. This may not have been their fault as such, as the programme this evening had gone a bit strange thanks to John Cale's late cancelation. But I could not wait so instead I went off to catch The BellRays. They are the band sometimes described as being what you would get if classic Tina Turner found herself fronting the MC5. And they are indeed a powerfully voiced black woman fronting a load of white guys playing music transitioning from late psych to hard rock. An appealing thing about them is that they are all quite old, possibly even older than me, yet they're all still going for it like motherfuckers. Catch them if they come to your town.

And that was almost that. We regrouped in the chalet (or in a chalet) for a bit of relaxation. There was still one more thing in the programme for that night, the enigmatically named Charlotte Church's Late Night Pop Dungeon. It was generally assumed that this would be the Welsh singer DJing some pop records: potentially fun. But when we drifted back to it we discovered that it was something else entirely, for this was none other than Ms Church playing with a full band on Stage 2. 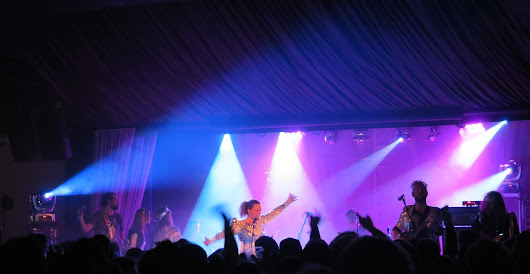 For the benefit of foreign readers, Charlotte Church came to prominence as a child performer of lovely songs that showed off her considerable vocal talents. As she has grown up she has pushed against the musical straitjacket of her youth and started trying to explore pop and art-pop directions. In her Late Night Pop Dungeon she sang a good few pop classics and a few songs she has had hits with herself. A stroke of genius was throwing in versions of 'Hometown Unicorn' by popular Welsh band Super Furry Animals and 'Holland, 1945' by Neutral Milk Hotel. This could be dismissed as indie tokenism but readers of a interviews with Ms Church will be aware of her liking for these bands. The actual highlight for me though was her cover of 'Don't Let Go' by En Vogue, with 'Last Night A DJ Saved My Life' running a close second.

There can be something a bit terrifying about adult former child stars. In the case of Ms Church I think we see the upside, someone of youthful years who nevertheless has the polished stage presence of an experienced performer. Her set was a highlight of the weekend and one of the greatest ATP performances I have ever encountered.

That should have been the end of the day for me but I had certain responsibilities to fulfil. Friends were arriving late on Saturday from Dublin for complicated reasons. They were not going to be in my chalet but as a responsible adult I was tasked with making sure their chalet-mates remembered they were coming. So I had to bring one to the camp's entrance so that she could bring in the new arrivals. Then we had a party in their chalet which went on into the small hours. Eventually I had to make my way back home, though on the way I met some confused people who couldn't find their chalet. I had a map with me but it turned out their chalet wasn't on the map. They left me and may be wandering around Pontins Prestatyn to this very day. 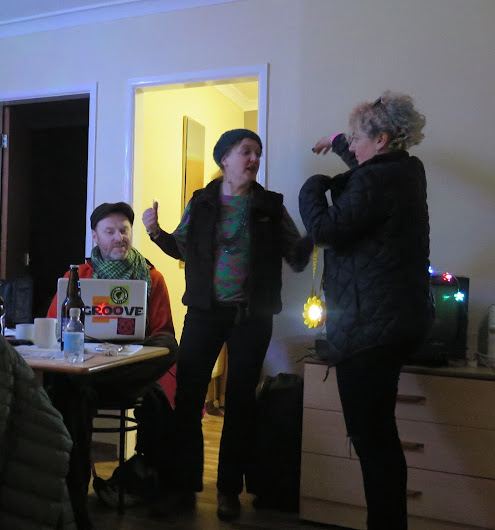