So yesterday I gave you some background on my amazing trip to the last ever All Tomorrow's Parties festival… now let me discuss some of what transpired there.

The first band I saw was Ex Easter Island Head. Or rather they were the first band I tried to see. They were playing in the minuscule Stage 3. The crowd of people there meant that when I arrived I could see little or nothing of the band. They seemed to be some kind of percussive outfit, possibly Gamelan influenced, and it was interesting to see their drum sticks rising above the heads of the crowd. From where I was though I was doomed to have the alienating experience of seeing little or nothing and having people pushing by me as they arrived or left. FTS, I thought, so I made my excuses and left, developing an antipathy towards Stage 3 that I retained for the rest of the weekend.

By now unpleasant news was permeating among the festival-goers regarding further organisational and other failures. Some people had dropped off the bill, notably Shirley Collins and vintage outsider comedy act Ted Chippington (both from illness, though possibly not the same illness). John Cale, a relatively late addition to the bill, had cancelled at the last minute and was tweeting about having been let down by the organisers (by which I think he meant that they were not paying him money he was due). This news contributed to escalating bad vibes in Prestatyn, as people wondered who else would suddenly turn out not to be playing after all. 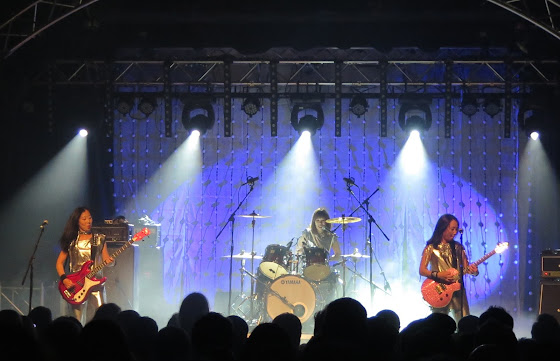 One lot who were still playing Shonen Knife. These are the Japanese pop-punk sensations who have been going for ages now with an ever-evolving line-up. Naoko Yamano remains the one constant, but she is joined tonight by another founding member, her sister Atsuko (who has switched from drums to bass). Naoko and Atsuko are both even older than I am (some might say too old to still be singing about capybaras and amusement park rides), but they are joined by the much younger Risa on drums.

In a festival where the bad vibes were rising it was great to have a band as relentlessly positive as Shonen Knife on the bill. They radiate such good cheer that they could not but lift the mood of gloom. To an extent anyway.

Festivals are great for checking out bands you have heard of but don't really know much about. Thus it was I went to see Sleaford Mods with an air of excited curiosity. Their name is a bit misleading, as anyone expecting them to be a Paul Weller tribute act would be somewhat disappointed. Instead they are two blokes, one of whom stands in front of a computer drinking beer while the other talks into a microphone. The talking hovers between rapping, toasting and verse-free invective. You could think of them as being like an art-rock version of Goldie Looking Chain (except with one rapper, so the analogy does not really work). I thought they might well repay closer attention but also suspected that they would be better live than on record.

I caught a bit of Richard Dawson, who was performing on Stage 2. He had been recommended to me. He is one of those neo-folkies and comes from a region. His songs are a bit in your face and often involve violent death. In between two of the songs he started telling a joke and then said, "You know what's a fucking joke? The organisational abilities of someone who isn't a million miles away from here".

Dawson did one song about some guy dying in an industrial accident or something, accompanying himself by stomping on the ground, but when he launched into a particularly in-your-face song about some guys taking forever to kill and butcher a horse I found myself thinking that there is only so much negativity I can take in my life. I'm not sure why murder ballads and songs about human death are manageable while I can't take songs about cruelty to horses (a class of animal I am not that pushed about generally), but I decided to skip the rest of Richard Dawson's set. The venue was also extremely warm, and in my tired Friday evening state it did not occur to me that maybe I could cool down by taking off some of my clothes.

I was getting very tired indeed by now but I decided to force myself to stay up to catch Friday night headliner, Roky Erickson (legendary frontman of legendary 1960s psych band 13th Floor Elevators). He is quite old now and has seen better days, as evidenced by his playing the gig sitting in a chair. He also began by saying that he almost did not play due to fuckwittery on the part of the ATP organisation but in the end he went ahead to keep it real for the kids. We appreciated the gesture. I heard it said subsequently that before playing Roky Erickson and his band were still waiting for ATP to cough up cash for a gig they had played in London earlier in the week and had packed up their stuff and were about to leave when Deborah ATP (Barry Hogan's business partner and wife) successfully begged them to stay. I was struck by how the 60s acid casualty turned out to be more professional than the festival organiser.

I was too tired to really enjoy Mr Erickson's set and can't but think it was a mistake to put them on so late on the first day when many people would have had a long day of travelling to get to the site. But I was impressed by his singing and his band (who recreated the classic Elevators sound by having a guy blowing into a whisky jug). 'Slip Inside This House' was a particular highlight, with this astonishingly being my first exposure to this song other than its recording by Primal Scream on Screamadelica. This version had a considerably more epic quality and lacks an early 1990s shuffle-beat. It felt like it could have gone on forever and in the moment it seemed almost to. But it come to an end and then Erickson followed it with some slow ballad that wasn't going to keep sleepy me awake, so I went back to the chalet to score some ZZZZs.