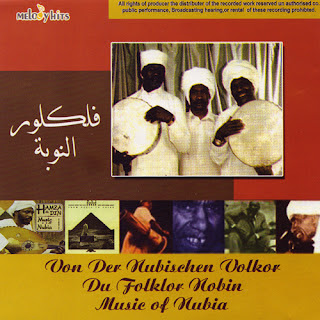 This is a bit of a mystery. I bought it in a record shop in Luxor in Egypt, a land untouched by modern intellectual property laws, so the copy I got was a CD-R with a scanned copy of the cover. So I have no idea when it was recorded or by whom or whatever. The sleeve mentions Hamza al-Din, a singer and oudist I have heard before on the record Escalay: the Water Wheel. There is nothing on this that sounds like his music and I suspect he is just on the cover because he is somewhat famous to people who are interested in Nubian music.

But wait! Before I go on to talk about the record, who are these Nubian fellows? You probably are aware that there is no country on the map called Nubia, so what are they all about? Well, the Nubians live in the south of Egypt and the north of Sudan. They are very focussed on the Nile River. Their culture is different from those of their northern Egyptian compatriots. They may even have their own language, though I reckon they must also all speak Arabic. And they feel a bit hard done by, because the Aswan High Dam (built by Nasser in the 1950s) flooded many of the places where they used to live.

The music on this record is mainly vocal and percussive. The vocals are often call and response, while the percussion has an incessant and hypnotic quality. This really is a very appealing record, particularly the 40 minute long opening track. Frankly, something bought on a whim in a market as a holiday souvenir has no right to be so musically enjoyable.