Trapped in the Closet latest 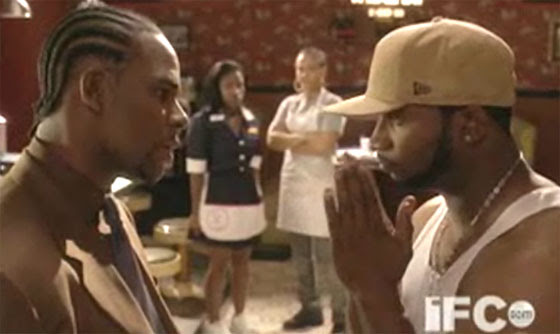 I have seen TITC episodes 13 - 22 and can reveal the following:

1. Twan's former girlfriend, the woman he suspected of grassing him up to the cops, turns out to have had his child while he was in prison.

3. Rufus the Pastor has decided to stay with his wife and renounce his gay lover.

4. But said gay lover is in hospital - and like all gay people who go to hospital, he is not there because he is getting his appendix out, but because he has The Package.

5. This means that everyone in TITC is in big trouble.

And Will Oldham plays a cop.

EDIT: It is in fact an inference of characters in TITC that Pastor Rufus' gay lover is in hospital because he has The Package; the Nosy Neighbour and her comedy chubster husband have deduced that this, rather than some routine tests, is what has him in the sickhouse. They have also taken it for granted that he must have given The Package to Rufus. Who knows, maybe TITC will prove to have misdirected them.
Posted by ian at 10:00 PM

I look forwards to watching this someday. Hopefully with a few drinks in me. Youtube his performance at MTV Video Music Awards for OTT madness!