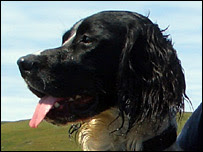 Ghillie the springer spaniel is to receive a PDSA bravery award later this month. Two years ago, when he was just nine months old, Ghillie saved his owner's life. The owner, Mary Wilson, had collapsed while they were out for a walk, but Ghillie barked to attract the attention of passers by, leading to Ms Wilson being rushed to hospital for life-saving treatment. 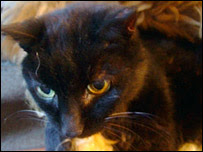 Pussywillow of Shropshire, meanwhile, is believed to be Britain's oldest cat. The 26 year old lived a semi-feral existence until four years ago, when a human family let her move in after she survived a fox attack. Pussywillow likes to curl up by the stove.
Posted by ian at 10:07 PM