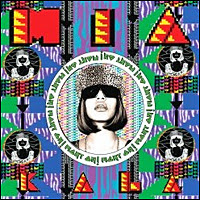 This is another record of the year candidate. OK, so it maybe trails off a bit, with the later tunes not living up to the promise of the first batch, but the overall level of quality attained leads to Kala likewise attaining astonishing heights of musical achievement. Just in case you never read what I write, M.I.A. is this Tamil-English woman who makes insurrectionary pop-hip hop collisions with added crunchy dance beats. On this one, on the great tracks, she goes for total dance mentalness, producing a slew of tunes you could play in sequence to keep a dance floor permanently in dance madness – provided they are forward thinkers, of course. I won't mention the odd covers or references she includes to certain other tracks as i) you have probably already heard about them or ii) it would be better for you not to have the surprises spoiled. More generally, this has a lot of Bollywood/Bhangra samples but has a considerably ravier sound than that on Arular, M.I.A.'s first.

One thing I will say about Kala is that it totally rocks as something to listen to while walking around, especially if you want to arrive there quickly.
Posted by ian at 10:19 PM

I disagree. that's all you need to know right now.

always with the disagreeing.