Draws Include All Survivors

I have started playing Diplomacy postally again. It's been a while, and I never played it that much in the first place. In case you have never heard of it, Diplomacy is the boardgame based around playing one of the European great powers at the turn of the 20th century. You engage in a lot of diplomatic discussions, try to form alliances, wheedle pathetically at people when they attack you, etc.. It is all based on a rather Realist view of the world; I am not surprised to hear that Kissinger loved playing it.

The amusing twist with this one is that I am playing it with a load of indie kid tweefuckers. Rather than being the pushovers you might expect, some of them are turning out to be devious little bastards. So fun is being had by all.

Want to play yourself? You could do worse than check out The Diplomatic Pouch or subscribe to a zine like The Abyssinian Prince.

I should point out that the game of Diplomacy is copyrighted by Avalon-Hill or Hasbro or your mum or someone like that. 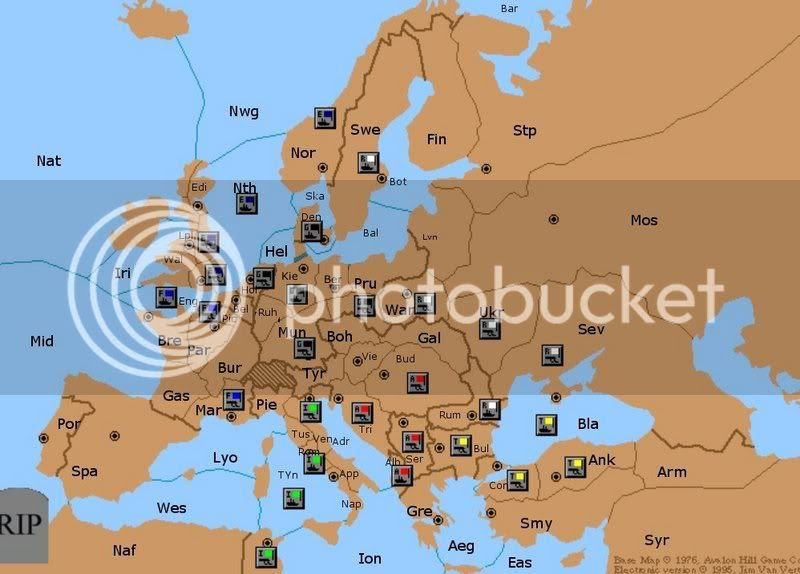 Email ThisBlogThis!Share to TwitterShare to FacebookShare to Pinterest
Labels: Games

Looking at the thread so far and the map for the most recent move, I think France is going to be a push-over for Italy and Germany if they can get their moves coordinated. Germany and Russia are doing quite well, aren't they?

France and Italy stood off in Piedmont in the first turn while France moved to Picardy and the Channel. France then NMRed in Autumn 01. Duh.

And yeah, Germany and Russia are doing quite well. I am playing neither of them. The map does not show the second build that Russia got (a south coast fleet in St. Petersburg).